Momo is my sweet, funny 17-year-old, 17-pound Coton de Tulear. I adopted him 10 years ago after retirement. Spunky in spite of his age, he is somewhat fussy about his food but eats a healthy meal midday and loves his treats. He is rewarded with a different one each time he comes inside after going out to do his business, usually four times a day. Momo sleeps more now that he’s aging, but he is otherwise healthy and content. He is friendly with everyone, but follows me from room to room when I am home — which is most of the time. And he seems anxious even if I’m out for five minutes to pick up the mail — pacing from room to room, apparently looking for me, according to my husband.

I love the little guy, but he has developed a somewhat unseemly behavior in the past nine months. When he goes out in the morning and noon, “he forgets to do everything.” He comes in, has his treat, and then he defecates — no diarrhea, thank God, on the living room carpet. Baffling.

Last spring we began to notice that he began to do his business closer to the house,  now sometimes even on the ramp leading to the door. When he originally began to have his “accidents” in the house, he would sneak off into the living room. But now, no matter how much I try to “keep an eye on him” he actually has the audacity to poop right behind me, minutes after his treat and just as I have sat down at our computer desk! Do I need to love him up even more? Do I need to increase my own anti-anxiety/anti-depressant meds, or does he need to take Lomotil? Or is this doggie dementia? Or all of the above?

Thank you for any help, and please stay safe!

Doggie dementia is a good guess. With dogs it’s called CDS (cognitive dysfunction syndrome) and the likely cause of Momo’s recent “accident issues.” Because dogs basically live in the moment, from Momo’s perspective, receiving a treat when he comes into the house has nothing whatsoever to do with relieving himself outside. He thinks he’s getting a treat for entering the house and coming to you. If you want him to connect the treat to defecating outside, he has to hear “Good boy!” (which he probably can’t do very well at 17) and receive the treat the moment the poop finished coming out of his body. No, I’m not suggesting that you go out and stay with him until he makes it. When he comes in, greet him as usual, sit down at the computer desk … but with him on your lap … being thankful that he’s not a 70-pound Lab. Being on your lap makes it very unlikely that he will relieve himself. If, and/or when, he gets antsy or fidgety, put him out again. Or, if feasible from within the house with a good flashlight, don’t let him in until he makes, or lap time if he doesn’t. I’d also suggest that you feed him on the spots where he’s had accidents, as dogs generally don’t like to eat where they’ve made (just as we don’t have meals in our bathroom). I’d also suggest that you ask your vet what’s the recommended drug for CDS. And finally, since I got to speak to you and you mentioned getting my book, please read the section on separation anxiety, which is common with CDS. Good luck, and give Momo a kiss for me. 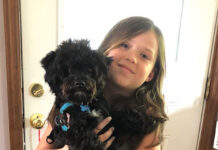 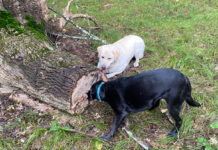 Dogcharmer: Porcupines are too attractive