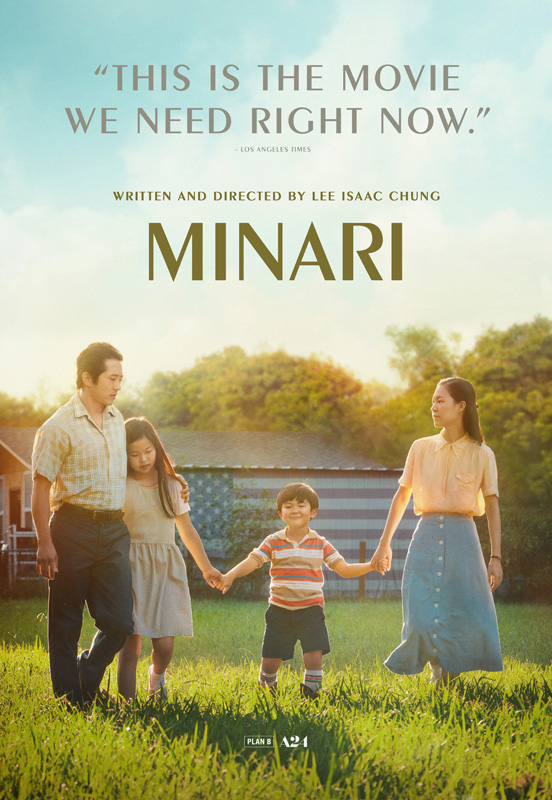 “Minari,” a warmhearted, semiautobiographical film about an Asian American family, is playing at the M.V. Film Center. Directed by Lee Isaac Chung and set in the 1980s, it narrates the story of the Yi family, who move to Arkansas to start a farm. The film takes its name from the Korean plant that is equivalent to Japanese parsley or Chinese celery. It’s a hardy vegetable that thrives in many places.

Jacob Yi is played by Steve Yeun, who was profiled recently in the NY Times Magazine. As Jacob, he settles his wife Monica (Yeri Han), son David (Alan Kim), and daughter Anne (Noel Kate Cho) in a secondhand trailer on 50 acres of Arkansas farmland. Monica, who liked her former life in California, is not too happy about relocating to the middle of the country, even though land there is a lot cheaper. The film is filled with the kind of appealing and sometimes funny details that make up the Yis’ life as immigrants.

Although they squabble, Monica resigns herself to their new life, where Jacob points out 50 acres is a lot better than the five they might have had in California. A local yokel named Paul (Will Patton) shows up with a dowsing rod, and he explains it will find the water needed to irrigate the crops Jacob plans to plant. Jacob dismisses this questionable device, but Paul hangs around to help. Jacob develops a partnership of sorts with this evangelical, who knows farming but has somewhat fanciful practices, like exorcising. He makes a comic contrast to Jacob.

Monica and Jacob earned their money in California by sexing baby chickens, and continue to do it in Arkansas. It is a complex process that identifies the sex of chicks, but one the Yis are highly skilled at. In the meantime, the film focuses on David, who has a heart-valve problem that makes his parents very protective of him. He’s not even allowed to run. When Grandma Soonja (Youn Yuh Jung, a well-known Korean actress) arrives, she brings with her native chilis and other Korean veggies not found in the U.S. She’s a crusty character who takes David under her wing, watches fights on TV, and definitely has a mind of her own. She makes an unpleasant-tasting concoction meant to heal David, and he retaliates by giving her a cup full of urine to drink. Blaming his grandmother, David wets the bed at night, but Soonja bluntly blames his “broken penis.” Minari enters the film when Soonja takes David for a walk in the woods to a stream where she shows him this hardy and praiseworthy plant.

The Yis attend a local church, where Monica, in an effort to impress the locals, puts a $100 bill in the collection plate. Soonja sneaks it back. David experiences a mild form of racism when one boy at church asks him why his face is so flat. Then he turns around and makes friends with David, inviting him for an overnight. It’s an example of the challenges the Yis find in coping with their new American lifestyle. On the way home, the family passes Paul lugging a giant wooden cross and the Yis look on with surprise.

After Soonja suffers a stroke and is taken to the hospital, David worries about her, an illustration of the attachment he’s developed. Grandma’s hospitalization is the first of a series of troubles that develop for the family. Yet despite them, the details of their life that Chung crafts make “Minari” an appealing story of one immigrant family and the life they create for themselves. It is one that may earn an Oscar nomination.

Information and tickets for “Minari” are available at mvfilmsociety.com.