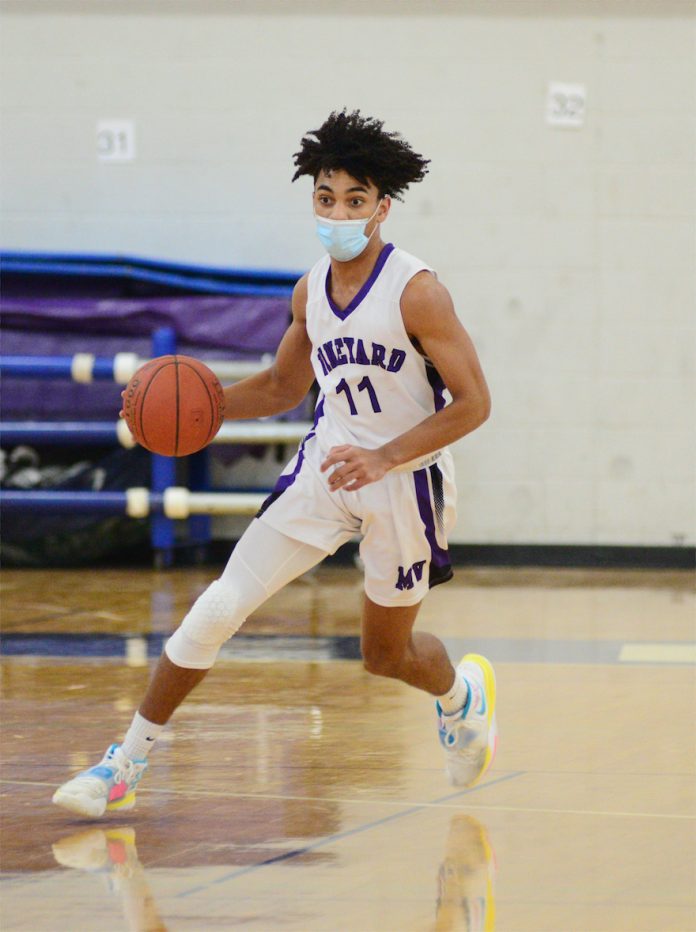 Dos Santos, the Vineyarders 6-foot 6 senior center, dominated the Clippers in the low post all night. “We knew going into it that they were going to struggle with that,” Vineyard Coach Mike Joyce said. “Rammon not only scored 21 points, but he probably assisted on another six buckets, I bet. When he drew the attention, he was unselfish to a fault, and he really got his teammates great opportunities and they made them. Mike made some threes, Leo [Neville] made two threes in the second half that were both big, so it really gave them a chance.”

While Dos Santos punished the Clippers in the paint, Falmouth guard Gerald Mahoney shot the lights out from the outside, scoring 21 points of his own, while accounting for five of the Clippers’ nine three-pointers.

There was little to separate the teams as the lead changed hands five times in the first half. Falmouth led 17-13 after one, and 28-27 at halftime.

The Purple hit their toughest stretch in the first five minutes of the third quarter. Both teams were sloppy with the basketball, but Falmouth still hurt MV from the outside. When Mahoney made back-to-back treys to put the Clippers up 36-29, the Vineyarders were bending.

But they didn’t break.

With Falmouth up 40-32 late in the third period, the game took a sudden turn as MV took off on a 17-0 run that stretched well into the fourth quarter. Rammon Dos Santos started the rally with a bucket in the paint, Aiden Rogers sank a three-pointer, and Leo Neville drained another trey with two seconds left on the clock to tie the game at 40-40.

The Vineyard momentum surged on into the fourth quarter. Suddenly, the Purple were red-hot, and the Clippers ice-cold. Neville led off with a steal, and Trusty scored on a put-back to send MV back in front. After a Falmouth miss on a three, Nico DePaula fired a strike to Dos Santos for another bucket underneath. Neville picked off another Falmouth pass, and fed Rammon for a jumper to make it 46-40. Falmouth continued to miss, and the Vineyarders were now moving the ball around the perimeter with confidence. DePaula popped a jumper, drew a foul, and made the free throw to cap off the big run with MV in front 49-40. Falmouth chopped three points off the lead, but two more Dos Santos buckets in the low post, an Aiden Rogers three, and a Mike Trusty jumper clinched the championship for the Vineyarders, who closed out the season with four consecutive victories to finish 10-5.

“Our defense just started taking its toll on their guards,” Coach Joyce said. “We got some turnovers, Mike Trusty had six steals, so that was big, and I think our defense won the day for us. Our offense was good enough … but I think defensively, really, we set the tone and just kept pressure on their guards the whole time, and every time their best point guard went out, they really struggled to get their offense going, and that was a key for us. We really kept them off-balance offensively all night.”