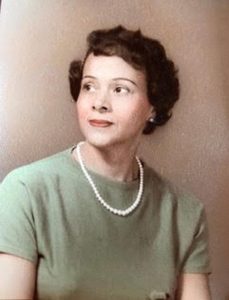 Mary was born on March 18, 1918, in West Chester, Pa., the fifth of six daughters of Leslie Pinckney Hill and Jane Clark Hill.

She graduated from West Chester High School in 1935. Upon graduation, Mary attended Howard University, pledged the Alpha Kappa Alpha (AKA) sorority, and pursued the academic nursing program. Ultimately, Mary finished her nursing degree at the Lincoln School for Nursing in New York City, making lifelong friends along the way.

In 1937, Mary married Herbert E. Tucker Jr. of Boston, and went on to a successful and fulfilling 25-year career as a R.N. at Massachusetts General Hospital.

As a young mother of two small children, Gwendolyn and Gretchen, she was fortunate to have a loving community of family to support her career endeavors. In time, she became the proud grandmother of two grandchildren; Gretchen M. Mercer and Richard (“Peter”) Gilbert Wharton Jr.

The Tuckers made homes in Roxbury and Wellesley for several years before moving full-time to Oak Bluffs in the late 1960s. On Martha’s Vineyard, Mary enjoyed the Inkwell as much as the East Chop Beach Club. Her collection of beach glass attests to the time she spent there. She also enjoyed gardening, playing bridge, reading, needlepoint, and being in the company of family and friends.

She was a member of Grace Episcopal Church, where she served on the Altar Guild, originated the idea for the Burgess stained glass windows, and donated the church steeple, but most memorably started the lobster roll program, which became a major fundraiser for the church.

Mary loved the Vineyard and credited her long life to living here with her doting husband of 70 years and for forming relationships with “young folk.”

Mary was predeceased by her husband Herbert, her daughter Gwendolyn Wharton and great-grandson Tristan Tucker Mercer. Among those left to celebrate her wonderful life are her daughter Gretchen Tucker Underwood, grandchildren Gretchen Mercer and Peter Wharton, her great-grandsons Jason and Brandon Mercer, nieces Judith Lindsay, Lila Rideau, Gail Snowden, and nephews Leslie Hill Nelson and Frank M. Snowden, and a host of great-grand-nieces and -nephews.

Because of COVID requirements, her service will be private, but available to all on webcam on Saturday, March 27. Starting at 12:30 pm, you may click on graceepiscopalmv.org. The actual service will begin at 1 pm.

In lieu of flowers, the family requests that donations be made to the Grace Episcopal Church, Box 1197,Vineyard Haven, MA 02568.