A month ago a proposed natural resources assistant position to be shared between the Tisbury harbormaster and shellfish constable appeared dead in the water.

But on Tuesday, during their latest marathon 3 hour, 15 minute session, the Tisbury select board had a change of heart, and will now recommend the new position to town meeting voters. Their decision follows support by the town’s finance committee for the new position.

In the process, a part-time summer assistant to harbormaster John Crocker will be eliminated, and a seasonal employee who helps out shellfish constable Danielle Ewart in the off-season is being cut.

Though select board chair Jim Rogers said he still has questions about how the roles will be delineated, select board member Jeff Kristal said Crocker has put together an “action binder,” and town administrator Jay Grande can work on an organizational flow chart.

“Who is this person going to report to in the wintertime, John or Danielle?” Rogers said. “If something goes wrong, and we always know that something can go wrong, it comes to accountability … So I think that needs to be ironed out before we can move forward with this or any other position in town.”

Despite making that statement, Rogers approved moving ahead with the new employee moments later.

Kristal said the harbor and shellfish departments have a lot of work ahead of them, and will need the help with new aquaculture farms, dock work, and enforcement. He pointed out that the town’s buildings are falling apart because maintenance was neglected.
“I don’t want to neglect departments because we’re too frugal with putting the money or resources in to support them,” he said.

Slow down on Franklin Street

Drivers will have to slow down on a section of Franklin Street, but the Tisbury select board stopped short of reducing the speed limit on the entire street to 25 mph.

Select board member Larry Gomez, who lives on Greenwood Avenue, said speed is definitely a problem on the street. “We talked about this in my other term, and it never got changed,” he said, adding that he wholeheartedly supported reducing the speed limit.

Pamela Brock, who lives on Franklin toward West Chop, appeared to have the board convinced to look at reducing the speed to the entire stretch of roadway. “The speeders certainly get revved up near that Mink Meadows Road,” she said.

Siobhan Mullin of Betty’s Lane said it’s dangerous for pedestrians and children riding bikes on Franklin Street. “You’re taking your life in your hands on that road some days, with the speed that people do from Bernard Circle out to West Chop Woods, actually as far as West Chop itself,” she said. A reduced speed limit would make her feel safer, she said.

However, Nelson Sigelman, who lives on Bernard Circle, questioned reducing the speed limit in areas where there is no street parking, saying it would feel like “crawling” at 25 mph headed toward West Chop. “I don’t believe in management by worst-case anecdote here,” he said.

Kristal recommended approving the chief’s recommendation and taking a wait-and-see approach on the other stretch of road.

The board approved the reduced speed limit unanimously.

Earlier in the meeting, Saloio was pressed on his budget proposal for fiscal year 2022. The budget contains funding for 14 officers, but the 14th slot remains unfilled. Saloio hinted that it’s litigation that is keeping him from filling the position. He said the position is needed, but Gomez in particular was not convinced, saying that the size of the department continues to creep up.

“If we don’t need the officer now, take out the money,” Gomez said.

In a separate vote, Andrew St. Pierre was hired as a full-time traffic officer. He will replace Eloise Boales, who retires at the end of this week.

The construction of a shared-use path, in general, and the relocation of sewer pipes, in particular, continue to be a source of frustration for the select board.

During Tuesday’s meeting, the board voted unanimously to send a letter to Massachusetts Department of Transportation (MassDOT), and copy it to the Island’s legislative delegation, seeking a solution to the infrastructure work before any work continues. Once construction is underway, “we’ll have little management control,” Grande said.

“Fixing this sewer line is part of their Beach Road project, and it’s something they should be held accountable for,” Rogers said.

Debby Packer, whose family owns commercial property along the waterfront side of Beach Road, implored the board to do more to stop the project, saying it’s unsafe, particularly for large trucks going to and from the ferries and to her family’s barge business, because it doesn’t follow National Highway Traffic Safety guidelines. “I think this is an emergency,” she said. “You have the power to save Tisbury’s working waterfront that benefits everyone on Martha’s Vineyard … I’m begging with you. I’m pleading with you to take action. It is in your hands.”

She said MassDOT has gotten a waiver to reduce the size of the travel lanes to accommodate the SUP from the standard of 12 feet to 10.5 feet. “That puts a lot of pressure” on truck drivers, she said. “It’s hard to understand if you’re not a CDL driver.”

She said the idea that the Beach Road SUP is the “missing link” for bike travel isn’t accurate.

Kristal again reiterated that the current board doesn’t support the SUP, and is working within the process to advocate for the town and property owners. “This board hasn’t sat back being silent about it, we’ve been working the channels,” Kristal said.

In a separate Beach Road matter, the town will allow the owners of the Citgo gas station to run a hose across Beach Road, down Beach Street Extension, and into the harbor to dispose of groundwater.

Adam Guaraldi, who spoke on behalf of Citgo, said typically they would be allowed to pump the groundwater into storm drains, but the ones on Beach Road are not working properly. Both the Environmental Protection Agency and the conservation commission have approved the complicated plan for surface discharge of the water using the hose from the station to the harbor.

It’s all part of a project to remove aging fuel storage tanks and replace them with new ones, Guaraldi told the board.

The select board approved the project unanimously, but with conditions. Citgo must indemnify the town, provide evidence of liability insurance, and finish the project (at least the use of town roads) by May 26.

In other business, the board unanimously approved the purchase of a $65,000 command vehicle for the fire department after briefly considering a lease option. Town meeting voters will have the ultimate say.

The board also approved 330 additional gallons of flow for a development proposed by Sam Dunn at the former Santander Bank on Main Street. The board took no action on Dunn’s request for access to the property via town roads, because the developer was not available on the Zoom call to explain what he was requesting.

A public hearing on sewer regulations and a proposed new fee structure was scheduled for April 27 at 6 pm. 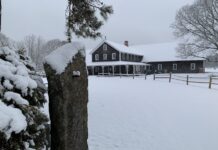