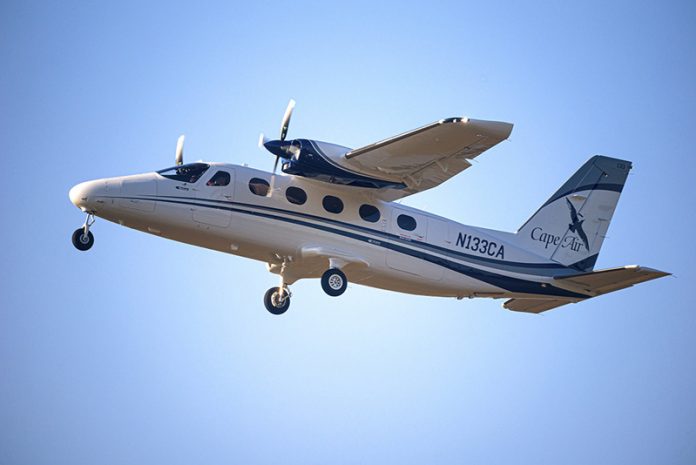 There’s a new commuter airplane on the horizon for Vineyarders. I’ve seen it a couple of times at Martha’s Vineyard Airport, but haven’t been in it yet.

Cape Air has purchased 20 Tecnam P2012 Travellers, and has an option for 90 more. The plan is to replace the entire fleet with new airplanes. Cape Air pilots are being trained on Traveller, and the plane is being flown on different routes through the Cape Air network. Most of us think of Cape Air as an airline for the service to and from Boston, New York, and Nantucket. But flights range throughout Cape Cod and the Northeast, the Caribbean, the Midwest, and Montana.

Cape Air is the largest, or one of the largest, commuter airlines in the U.S. It was founded in 1989 by Dan Wolf, with only one route, between Boston and Provincetown, and a first-year total of 8,000 passengers. On its first day, it had one airplane, two pilots (one of them was founder Dan Wolf), and three passengers. Today it has approximately 700 employees, and serves more than 600,000 passengers a year. In season it has up to 400 flights a day.

The aging fleet of 88 Cessna 402s is being replaced with the new Travellers which occasionally fly from the Vineyard. If you’re lucky, you may get a ride in one soon. And you’ll know you’re in the new plane from the new-car smell to the enhancements. How about underseat storage so you can take more than your phone onboard? The high wings mean aerial photography is unobstructed. And back to the phone, there’s a USB port in the window armrest. Remember summer? Now there’s air conditioning.

Like the Cessna 402s, the Traveller is a twin-engine airplane with state-of-the-art instruments. The design of the new plane started nearly 10 years ago with a relationship between Cape Air and Tecnam, an aviation manufacturer in Capua, Italy, near Naples.

Why go to Italy for a new commuter plane? And why this particular plane?

About 10 years ago, Cape Air started looking for a replacement twin-engine commuter airplane, but no manufacturers in the U.S. were making them, and Tecnam was the only manufacturer to respond to Cape Air’s search for a company to design, develop, and build a new, modern, twin-engine aircraft with a focus on safety, convenience, and economy, according to Cape Air.

Tecnam, founded by two brothers, both pilots, with dreams and passion to build airplanes with style, quality, and dependability in 1948, is a family-run company, with the third generation taking its place. The plane designed for Cape Air is the first plane Tecnam developed from the point of view of the operator.

There are currently about 5,500 Tecnam planes, in 33 different models, flying in 65 countries. And Rolls Royce just announced a partnership with Tecnam to build all electric passenger planes by 2026.

The instruments on the new Cape Air planes include traffic avoidance and GPS, just like your phone. It’s like going from auto club maps to GPS, all to our benefit as enhanced safety.

It’s also quieter inside and out. The plane is built in Italy to European noise standards, which means the plane is quieter on the outside, with more respect for ground-based earthlings. Passengers may appreciate the fixed landing gear, which avoids the clunk when the gear is raised and noise when the gear is lowered for landing.

There’s also a cockpit door, so the pilot doesn’t have to squeeze past passengers. She has her own entrance and exit. Did I say “her”? Cape Air is a women-run company. The president and chief operating administrator is Linda Markham, who has been with the company since 2002.

I can hardly wait for a flight.

Irene Ziebarth is an aviation enthusiast and private pilot.

Notes from a snowbird