Peter B. Herrmann of Edgartown, an avid outdoorsman, sportsman, and family man, died, much too soon and unexpectedly for all of those who loved him, on April 20, 2021, of a medical emergency in Oak Bluffs. He was 75. 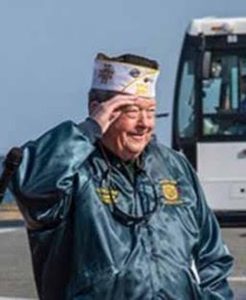 Peter truly loved life and lived it to its fullest, whether fishing with his grandkids, hunting with his many friends, or trying to knock a softball out of the park when he played for the Nine Wonders softball team of Oak Bluffs.

Peter was born to Clarence and Kathleen (Alley) Herrmann of Oak Bluffs on Dec. 26,1945, at the Martha’s Vineyard Hospital. He attended the Oak Bluffs School and Martha’s Vineyard Regional High School. Summers were spent with friends, doing all the things that Island kids did: fishing, swimming, and having fun.

He briefly attended Cape Cod Community College, but motivated by a sense of patriotism, and to serve his country, he enlisted in the Navy in December 1964. He served aboard the USS Kitty Hawk while the supercarrier was stationed off the coast of Vietnam, which gave him great pride. He was honorably discharged in November 1967. While in the service he met his beloved wife, Sandy Pilger. They were married on April 27, 1968, and stayed married for the next 53 years.

Following his enlistment, he attended the University of Massachusetts Amherst, where he was a member of the rugby team and played for the Providence Rugby Club. He received his bachelor of arts in education, and soon afterward he began teaching physical education at Somerset South Middle School.

Peter moved his family to Edgartown, and commuted to Somerset every week until he retired. But he wasn’t the type to sit around. He worked for the Vineyard Transit Authority, driving buses around the Island and smiling at everyone he met, right up to the time of his death.

Peter was very proud of his military service, and was an active member of the Veterans of Foreign Wars Post 9261 in Oak Bluffs, where his energy and enthusiasm were greatly appreciated. He served as post commander, and most recently as quartermaster.

He was an all-around kind, caring, and generous person who was always there for family and friends, and will be greatly missed by all who knew him.

A graveside service for the interment of his ashes will be held on Saturday, May 1, at 11 am, in the Sacred Heart Cemetery in Oak Bluffs, officiated by the Rev. Michael Nagle, with military honors provided by the veterans of Martha’s Vineyard.

Arrangements are under the care of Chapman Funerals and Cremations in Oak Bluffs. Visit chapmanfuneral.com for online guestbook and information.