Before 911, before police radios and walkie-talkies, there were blue light bulbs over Main Street, Vineyard Haven. When a call for help came in, the telephone company switched on the light to signal the Tisbury police, like a Vineyard Haven Bat-Signal.

The late Bob Renear of Vineyard Haven recalled, “When you wanted to call the police at night, they would trip that light bulb. They would answer the phone and call back to the operator.” Bob’s brother Walter Renear added, “I remember the blue bulb. It was in two different places. It hung right over the intersection of South Main, right in front of the Educomp building. And then it was on the head of Union Street on Main. They put a wire across the street, and hung it right in the middle. Same thing down at Educomp.”

The town’s first police station was in a narrow alley between what would become the two halves of the Vineyard Dry Goods store on Main Street (today the Louisa Gould Gallery and Bespoke Abode). Formerly a summertime booth selling fireworks, the police used this unheated space as their headquarters from the mid-1930s until World War II. Bob Renear described it as “a little closet — it was about a little bigger than a door’s width. And they had a desk in there, and a telephone.”

Tisbury’s first chief of police was Ed Flaherty (1884-1941), born in South Boston to Irish immigrant parents. He lost his job with the city police after the Boston Police strike of 1919, and came to the Island seeking work with the local force. He served as Tisbury’s chief from the mid-1920s until his death in 1941. (Before Flaherty, local law enforcement was served by a series of constables.)

The next chief was Tisbury native Simeon (“Sim”) Pinkham (1902-1957). The late Basil Welch remembered Pinkham: “He could put the fear of God into you ’cause he had a very pockmarked face, and he could look awful tough if he had to, but he had a big heart for kids.” The late Stan Lair recalled, “He had a terrific memory for number plates, I remember that. You asked him what your number plate was, he could come right out with it. He knew them all.” Pinkham, like Flaherty, died in office, in 1957.

In 1943, the police station was moved out of the alley. It temporarily occupied an empty store in Cronig’s Block, before moving more permanently in 1944 into a former fish market on Union Street, about where Murdock’s Fudge is located today.

Our next chief was William Wallace (“Billy”) King (1909-1963), a Tisbury native and the eldest of 11 children of Madeira-born laborer Manuel De Canha. (Billy was also the brother of Tisbury’s superintendent of streets, “Manel” Canha/King. Some of Manuel De Canha’s children used the surname “Canha” and others “King.”)

Billy King was a lifelong member of the Tisbury Police force, a career interrupted only by a short stint at Otis Air Force Base during the war. Upon Chief Pinkham’s death, King became Vineyard Haven’s third police chief, serving in the post until his own death in 1963. The late Basil Welch of Vineyard Haven recalled in a 1982 interview, “I’ll always have fond memories of Billy King. Billy worked for the police department in town. He was a night watchman for many years. When Sim died, Billy King was made chief of police.”

Chief King is remembered more for his generosity and sense of humor than his case-cracking legal acumen. “He could never be a chief of police today, in this fast day and age,” said Welch. “But he had a way with kids and with young people. There was very little crime around when Billy was chief.”

In 1962, the Tisbury Police Department officially handled 5,000 calls, 1,200 complaints, 77 auto accidents, and 24 arrests (mostly for “drunkenness”). Chief King, who drew a salary of just over $5,100, had two year-round patrolmen working under him — Raymond Maciel and Donald Leonard — as well as a team of summer and relief patrolmen.

In 1962, the town purchased a large lot on Water Street from Colonel Edward Roth, in a move applauded by Chief King as a solution to the town’s parking problems — we know it today as the parking lot next to Stop & Shop. That year the town also acquired a $1,675 police cruiser. Before King’s tenure as chief, the police used patrolmen’s personal vehicles, reimbursing them for expenses. In 1962, the police cruiser was used as an ambulance 56 times. The force maintained just a single cruiser for many years.

Welch recalled, “My fondest memories of Billy were when he had the cow, at Skiff Avenue and the Edgartown Road. He used to keep the cow down by the old Marine Hospital, down by Causeway Road, and every morning he would tie the rope on the back of his car bumper, and he would coast very slowly down the hill, and the cow would walk behind. And he would tie it out in the field down there for green grass. Late in the afternoon, Billy King would get the cow, tie the rope in the back bumper of the car, and very slowly chug away going back up the hill, with a cow plodding along behind him. I’ve never seen a picture of it [laughing], it’s something that’s too bad that somebody hasn’t got a picture of it. I remember Billy working at night. He used to come into Island Transport, which was a taxi stand where the Bowl & Bistro is now, and I used to work there. I remember Billy coming in, getting ready to go to work, and he’d have on his navy blue serge uniform, and the cap, the police hat, would be chock full of white cow hairs where he had his head up against the cow’s belly when he was milking it.”

King also served as the Island’s circulation manager for the New Bedford Standard Times. His niece Barbara Baldwin recalls, “I did go with him one time delivering papers; there was a certain way you had to fold the newspapers so they wouldn’t come apart when you threw them [out of] the window of the vehicle.”

“He was a nice guy,” recalled Welch. “He used to deliver the Standard Times to the different paperboys, bundles of them, and a couple of times a year Billy would take all his Standard Times kids and, at his own expense, pile them into his car and take them to Boston for the Red Sox baseball games.”

Chief King died in 1963 at the age of 54. Raymond Maciel, then a sergeant, immediately became the next chief of police. Chief Maciel eulogized King the following year in his report to the town, especially recalling “the sympathetic way in which he dealt with people in distress, be they Island children and adults or strangers.”

In 1965, a new police station was built in the new town parking lot. It is today occupied by the public restrooms. 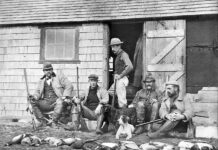 This Was Then: The deerly departed 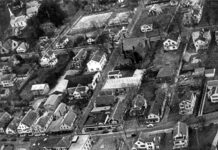 This Was Then: Barnstorming