Steve Rogers, also known as “Lens,” passed away recently at his home near Winter Park, Fla. 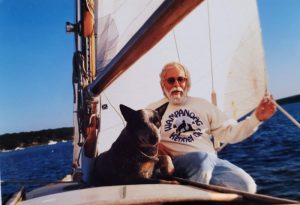 A musician, photographer, and sailor, we have known him since 1966, when we met on Beacon Hill in Boston. Steve studied to be a veterinarian, but turned to music, forming a band called the Overwhelming Minority, and studied with Doc Watson in Provincetown. One album was produced, and many gigs were played in the ’70s. Steve played banjo and guitar, and loved his Martins, which he played and traded.

An outgoing, irreverent, creative person, he was born in 1946 in Fairhaven, and will be missed. His love of animals was a constant. Steve had resided on Martha’s Vineyard since around 1995, and worked for a long time as building manager for Larry Levine in Vineyard Haven. He is survived by his dog, Jake, his many Island friends, and his brother, Cole Blodgett.