The Martha’s Vineyard Regional High School (MVRHS) has been denied eligibility for the 2020 Massachusetts School Building Authority (MSBA) grant program — the sixth consecutive denial the school has received, according to a letter from the MSBA to Superintendent Matt D’Andrea.

Each year, MVRHS and dozens of other school districts in the commonwealth submit statements of interest (SOIs) illustrating their level of need and urgency related to school building construction, renovation, and repair. The MSBA then awards grants to those districts with the greatest and most immediate needs.

The authority reimburses between 20 and 80 percent of the total construction cost of entire projects based on need, and the high school overhaul would most likely qualify for approximately 40 percent reimbursement, if approved.

Overall, the MSBA received 71 SOIs from 52 different school districts for consideration in 2020, the letter reads: “Based upon the MSBA’s review and due diligence process, it has been determined that the Martha’s Vineyard Regional High School SOI will not be invited into the MSBA Eligibility Period at this time. If the district would like to be considered for future collaboration with the MSBA, the district should file an SOI in an upcoming year.”

The MSBA is currently accepting SOIs for consideration for the 2021 grant cycle.

“The MSBA remains committed to collaborating and partnering with the Martha’s Vineyard Regional School District to better understand the facility issues within the district,” the letter reads. 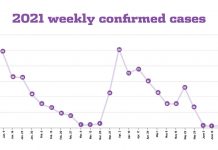