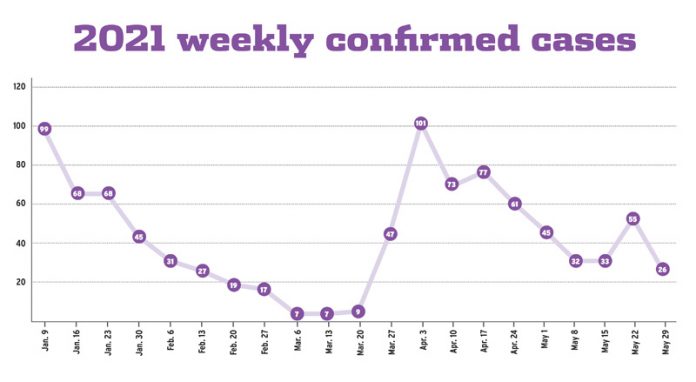 One week after cases spiked on Martha’s Vineyard to 55 positive results of COVID-19, they were back down to 26 total cases for the Island last week, according to an expanded report released Monday by the Island boards of health.

Of those 26 cases, 19 were from Martha’s Vineyard Hospital, four were at the TestMV site, 2 by the Wampanoag Tribe of Gay Head (Aquinnah), and one from another unspecified provider. Twelve of the cases were symptomatic, 9 were asymptomatic, and five were unknown.

That brings the total number of cases to date to 1,581 with 1,499 of them confirmed with positive test results, according to the data. The cases involved 769 males and 730 females.

Newer positive cases continue to involve young people with more than half 14 individuals under 29. Eight of the cases were for individuals 10 and younger.

Dukes County and Nantucket counties continue to have the highest COVID-19 positivity rate in the state, according to data from the state Department of Public Health.

Tisbury remains the only Massachusetts municipality in the state’s “red” or highest COVID risk category due to having 30 cases in the past two weeks and a positivity rate of 6.86 percent.

With Tisbury’s population just over 4,000, the number of cases needed to designate it as highest risk is 25. The state’s seven-day average of percent positivity is 0.8 percent. Towns with less than 10,000 residents are considered the highest risk for COVID-19 transmission if they have had more than 25 cases.

As of Tuesday, the hospital has administered 18,658 tests, with 1,074 positive results. There have been 17,576 negative tests and zero pending results.

As of Monday, TestMV, which is located in the parking lot at Martha’s Vineyard Regional High School, has now administered 38,238 tests, with 375 positive results, 37,733 negative results, and 130 tests pending.

The town of Aquinnah has conducted 456 self-administered tests, of which two have come back positive, 454 negative, and no pending results.

The Martha’s Vineyard public schools have administered 43,662 tests. Of those, 18 have tested positive.

The Wampanoag Tribe of Gay Head (Aquinnah) has reported a total of 14 positive cases of COVID-19.