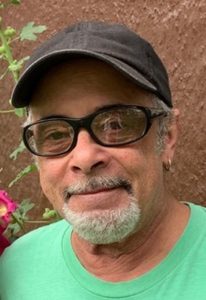 Lon was the firstborn, on Jan. 21, 1952, of Billy and Blanche Jackson in Los Angeles during an era of difficult race relations in America. After several years, his parents returned to Champaign, Ill., and he became a lifelong resident.

His primary profession was hotel maintenance, and he supported the Champaign American Legion (Unit 24) in later years. However, Lon’s passion was music. He loved rhythm and blues and rock and roll, and was a talented guitar player whose emotions and sentiments were conveyed through soulful performances. Lon was an avid collector of geodes, fossils, and megalodon shark teeth, and wampum from the quahog shell. He immensely enjoyed his delicious BBQ with an ice-cold beer and cigarette.

When possible, Lon returned to Martha’s Vineyard (MV) after spending summers there in his youth with family. He loved fishing, and cherished lifelong friends on the Island off Cape Cod, and in “Chambana.”

Lon led a passionate life, which could be fiery and boisterous, but at times quiet and contemplative. He had a young and vibrant spirit that stubbornly attempted to defy aging. His spirit enabled him to live life by his rules, and he was fearless in that regard. Lon had a magnetic smile with a contagious laugh, and an intelligent and witty sense of humor, like his father’s. He could make anyone laugh, and at times he would even chuckle at his own jokes.

When very young, Lon married Claire Michael-Ward, and they had two beautiful, smart, and talented girls. Later in life, he married Marcella Padron. Although they parted company, she and her daughter Ashley remained friends with Lon.

Devoted and caring, Janis Lee Weaver is Lon’s long-term friend who was a steadfast support in his life. Janice blessed him with a handsome, considerate, and loving son who shares an uncanny resemblance to Lon. His youngest “child” is his beloved dog, “Boo-Boo,” who has recently been adopted into a loving home.

Lon recognized his greatest gifts in life were his children. He loved them dearly, and was proud of who they’ve become. Moreover, he appreciated their unconditional love during the peaks and valleys of life.

Lon requested cremation without a funeral service. Per his wishes, Lon’s ashes will be placed with Connie M. Rogers, his dearest friend of many years who predeceased him in 2007. He also requested his mother’s ashes be placed with him after her transition. They’ll rest together in eternal peace off the coast of Martha’s Vineyard, where they shared fond memories.

The family expresses gratitude for prayers of comfort and peace. In lieu of flowers, monetary donations to local pet shelters in Lon’s name would be appreciated.