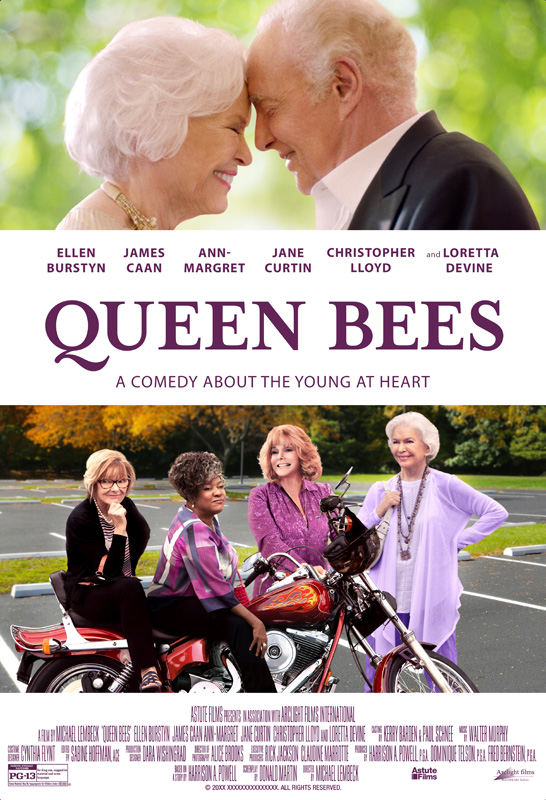 “Queen Bees,” a rom-com for seniors, is playing at the M.V. Film Center. In it, four women are living in Pine Manor, a senior citizen residence, but one of them resists being there. Directed by sitcom veteran Michael Lembeck, the plot unfolds with plenty of jokes to leaven the story. A high-color palette contributes to the comic style.

Helen, played by Ellen Burstyn, is annoyed by the brochures from Pine Manor retirement home she receives in the mail, keeps locking herself out of her house, and wants no part of heading to Pine Manor, a home for the elderly. This is despite her grandson (Matthew Barnes) Peter’s gentle urging. It’s clear that despite her determined independence, she’s ready for this community whether she admits it or not. After an accidental fire in her house, she agrees to live there until her house is renovated.

Lo and behold, three other feisty women, the queen bees, are already there. They include Margo, played by Jane Curtin; Janet, played by Ann-Margret; and Sally, played by Loretta Devine. Helen asks to join their bridge game, but they already have a foursome, and they veto adding her, or letting her join them for lunch.

Before long, Dan (James Caan) takes a liking to Helen, who resists his advances. The wisecracks continue. For instance, when Sally’s cervical cancer returns, she freaks out, but shares a joint with Helen. With jokes about Sally’s hair extensions, they reminisce about life in the ’60s, are appalled at waking up together, and drop snacks all over the floor. “This is not high school,” snips Helen. “It’s worse. In high school, we graduate,” says Sally. “Here we die.”

Each of the characters has a thinly distinct personality. Helen insists she’s only going to spend a month at Pine Manor. Margo is the grumpy, even hostile member, Janet has a past with five husbands, and Sally is dealing superficially with cancer.

As the plot proceeds, Helen’s house takes much longer to renovate, and despite her suspicions, she arranges flowers with Dan and begins dancing with him. Margo flirts with Arthur (Christopher Lloyd), who can’t remember her name, and Janet pretends that she had lunch with her son at a Chinese restaurant.

Realizing that Janet is being ignored by her family, the other three women decide to join her at the restaurant. After a man manages to bump into their table, they realize he’s stolen Helen’s purse. They chase after him and, kicking him in the crouch, retrieve her purse. It’s another example of how episodes turn lighthearted, and it’s appropriate for a comedy about the elderly.

What makes “Queen Bees” work is the cast of long-term and talented actors. The plot may be conventional, but they bring a liveliness that keeps it moving along at a pleasant pace.

Information and tickets to “Queen Bees” are available at mvfilmsociety.com.