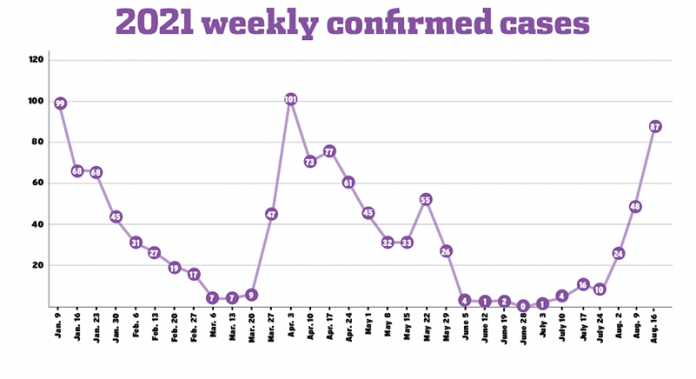 Of the 87 new cases, 72 were reported at the Martha’s Vineyard Hospital, seven at TestMV, six at the Wampanoag Tribe of Gay Head (Aquinnah), and two at other providers. There are 74 cases still being monitored by public health officials, six that have recovered, and seven lost to follow up from health officials.

There were 43 symptomatic cases, five asymptomatic, and 39 unknown. Of last week’s cases 42 were fully vaccinated, 20 unvaccinated, and 25 unknown.

Later in the day on Monday, Tisbury health agent Maura Valley released the results for Sunday and Monday. There were 16 new cases reported — 11 on Monday and five on Sunday. All but 5 of the cases were reported by Martha’s Vineyard Hospital.

Hospital officials have confirmed that the Delta variant is present on the Island. Only 4 cases have been confirmed out of six samples tested for the variant.

This is the third week in a row that cases have nearly doubled from the previous week. Last week’s 87 cases are the third highest weekly total reported this year, behind 101 cases in late March and 99 cases in early January.

The majority of new cases are from younger individuals. There were 26 in their 20s and 19 in their 30s.

Island health officials are taking note of the rise in cases. The West Tisbury board of health approved an indoor mask mandate in all public places. The board also voted on a mandate for town employees to get vaccinated. That mandate ultimately is up to individual appointing authorities to decide whether to move forward with the mandate.

The Oak Bluffs board of health called an emergency meeting for Tuesday at 11 am to consider an indoor mask mandate for town buildings.

The Chilmark board of health is meeting at 5 pm Wednesday to discuss an indoor mask mandate.

In response to inquiries about hospitalizations and other information, hospital chief nurse and COO Claire Seguin told The Times the hospital is planning a press briefing in the coming days.

The Ritz Cafe closed its doors temporarily this weekend after a staff member tested positive for COVID-19. The Instagram and Facebook post says the popular Oak Bluffs nightspot plans to remain closed through Monday.

“One of our team members has tested positive, and out of an abundance of caution we are testing all staff. Health and safety of our staff and customers alike are of the utmost importance to us,” the post reads in part.

A week earlier, several restaurants in Edgartown closed because of COVID cases.

Meanwhile, Gov. Charlie Baker told reporters during an unrelated briefing Monday that he has no plans to change the state’s mask guidance, according to the Boston Globe.

“I’m not considering changing the mask guidance … at this time,” Baker said, according to reports. ” … The fact that so many people in Massachusetts have been vaccinated, and that is real tribute to the enthusiasm that the people of this commonwealth showed to getting vaccinated, has put us in a dramatically different place than many other states across this country.”

A cluster is defined as more than two people from different families or households with a shared source of infection.

TestMV and the hospital have seen an increase in demand for COVID testing over the last week.

The town of Aquinnah has administered 556 tests, with three positive results.

The Wampanoag Tribe of Gay Head (Aquinnah) has reported a total of 22 positive cases of COVID-19.

There were 18 positive tests reported at the Martha’s Vineyard Public Schools, from a total of 16,122 tested.

Updated to include Sunday and Monday’s numbers.