The Oak Bluffs Arts District (Dukes County Avenue and environs) is concluding its Art Stroll season this Saturday with additional artists, music, dance, and a special event. From 6 to 7 pm, the Arts District will host an auction of a unique sort. A dozen or so local artists were given the task of creating their own functional art by painting a chair in any manner they might choose. The 12 donated chairs will be auctioned off as a fundraiser for Habitat for Humanity. Also up for bid will be two outdoor showers — one designed by local architect Hutker Designs, and one from the home of the late Olga Hirshhorn, as well as an outbuilding by Nantucket Sheds and some garden items from local nurseries.

Writer, poet, humorist, and producer Arnie Reisman will serve as auctioneer, a role he has taken on before for various organizations. Whether or not you’re in the market for any of the items, Reisman’s participation should guarantee a fun time.

The stroll itself will take place between 4 and 7 pm, with the street closed to vehicle traffic, providing for a festival atmosphere. The event will incorporate open houses at all of the Arts District galleries, music by the John Alaimo Trio, and work by a number of independent artists on display on the street. Coordinator Holly Alaimo says, “The opportunity is open to all artists. It’s a free place to set up and sell their artwork.”

Over at the Galaxy Gallery, visitors will have the chance to check out the latest show featuring work by four different artists. The exhibit is titled “MultiMediums,” and will include photography by Janet Woodcock, encaustics by Scout Austin, drawings by Chip Coblyn, and paintings by Gail Rodney.

Coblyn’s contribution to the show is a series of large-scale charcoal drawings called “Tall Grass.” The images depict the physical devastation wrought upon dancer and choreographer Tessa Permar after she was stricken with Lyme disease in 2019. The drawings depict the progression of the disease and the debilitating symptoms that plagued the dancer over the course of a year. Coblyn was inspired to create the series after seeing Permar perform an original dance, also titled “Tall Grass,” based on her experience with Lyme disease, at the annual Built on Stilts festival two years ago.

“It’s so pervasive here on the Island,” says Coblyn of the tick-borne illness. “Almost all of my longtime friends have had it several times. When I saw ‘Tall Grass,’ it got my creative juices flowing.”

The six images in the series are artfully rendered moody depictions of the various stages of Permar’s illness. In many her face is obscured, or partially obscured, and the focus is an up-close snapshot of parts of the dancer’s torso or limbs. The first image, titled “Invasion,” shows Permar squeezing the skin on her stomach. The description reads, “She feels as if something is moving under her skin.” The others are titled variously “Burning,” “Delirious,” “Muted,” “Blinded,” and “Ascension” — the last depicting the dancer’s path to recovery. The thoughtful and dramatic drawings show exceptional talent and sensitivity on the part of the artist, and an honesty and vulnerability on the part of the model.

Coblyn and his wife Pam settled full-time on the Vineyard in 2019. Prior to that Coblyn enjoyed a successful career as an illustrator and graphic and industrial designer based in Bethesda, Md., just outside D.C. Retirement and relocation afforded the artist the opportunity to focus full-time on creating fine art, and he started participating in Tom Maley’s life drawing classes while seeking a subject to base a show on. The Built on Stilts performance proved to be the turning point for Coblyn, who describes the series as “a release for me as an artist-in-waiting.”

In his artist’s statement Coblyn writes, “As a lifelong athlete, my figure drawings tend to focus on the strength and athleticism of the model. As a professional dancer, Ms. Permar was a perfect fit physically, while her personal story provided the compelling element essential to successful art.”

As part of the Stroll lineup, Permar will perform “Tall Grass” at 4:30 pm.

Scout Austin is also making her Vineyard debut as an artist with the Galaxy Gallery show, and, like Coblyn, she made a career change upon moving to the Island in 2014. After earning a B.A. in fine arts from Syracuse University and a master of fine arts degree from the University of Florida, Austin did a 180 when she decided to pursue a career as an attorney. She practiced law for many years both in California and Massachusetts. Retiring from her law career has allowed Austin to return to her early passion for art.

Interested in photography as well as other artforms, Austin spent her first few years on the Island shooting scenes around the Vineyard and immersing herself in the look and feel of the Island. After she and her husband built a studio in their home, she started concentrating on encaustic landscapes inspired by her photographs. The encaustic process involves using heated wax to which colored pigments have been added to build up an image on wood or another sturdy surface. Austin’s vibrant images come alive with color and texture, imparting almost a storybook feel to the Island landscape. Texture especially plays a large part in Austin’s work. She loves to focus on trees, rocks, sand grasses, and other Island flora, and the textural encaustic process serves her well in that respect.

In her artist’s statement, Austin writes, “My work is narrative in nature. The stories I tell are both personal and universal. My hope is that those who experience my work come away with a better understanding of themselves and the world we live in.”

The other two featured artists in the Galaxy Gallery show will be more familiar to visitors. Gail Rodney is a member of the Martha’s Vineyard Art Association who exhibits her work at that group’s Old Sculpin Gallery in Edgartown annually. She also shows regularly with the Gallery of Graphic Arts in New York City, and she is a juried member of the Pastel Society of America. Rodney covers a variety of subjects in her work, from NYC and Venice scenes to Vineyard landscapes. The latter is what she is contributing to the show — both watercolors and oil paintings.

Janet Woodcock has been participating in the Artisans Festival shows for years, and has shown her work in galleries on the Vineyard and around the country. Working in traditional photography, using film that she develops in her home darkroom, she creates toned silver prints. Woodcock may be best known for her moody, sepia-toned images of barnyard animals and her eerie photos of the carnival side of the Ag Fair, but for the Galaxy Gallery show, she is exhibiting a wonderful series of botanical photographs.

A trip to the Art Stroll will afford an opportunity to visit two nearby artist’s studios — Lucinda Sheldon’s is right around the corner from Dukes County at 11 Vineyard Ave., and Richard Limber’s is on Upper Circuit Avenue (184R). Sheldon creates one-of-a-kind enamel jewelry, while Limber is a contemporary artist whose recent work includes images of civil rights hero John Lewis and Black victims of police violence. Limber’s work is very powerful, relevant, and, at times, controversial. 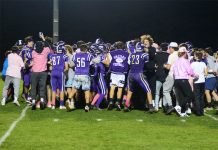