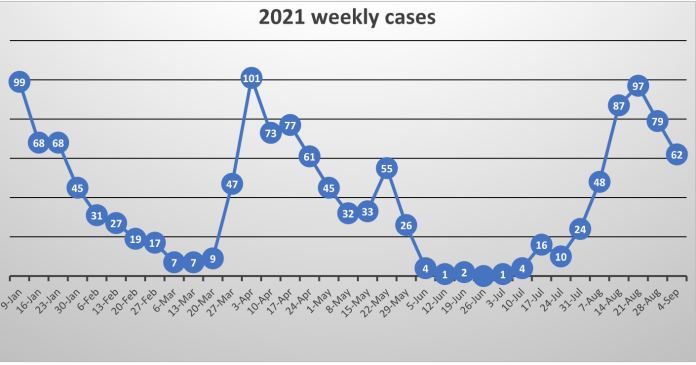 For the second consecutive week, the number of COVID-19 cases on Martha’s Vineyard went down. There were no new clusters reported, one week after there were four new ones confirmed.

The Island boards of health reported there were 62 positive test results for COVID-19 last week, a drop from 79 the week before and 97 two weeks before that. The Island saw a significant increase in cases for the month of August with 311 cases in a four-week period.

The Island has now had 2,036 total number of cases since the pandemic started in March of 2020 and there have been 19 clusters overall. The Delta variant has been confirmed in six of nine cases tested.

Of the 62 confirmed cases, 41 were at Martha’s Vineyard Hospital, 16 were at TestMV, 3 were reported by the Wampanoag Tribe, and 2 were from other providers. Of the new cases, 33 were symptomatic, five were asymptomatic, and the status of 24 was unknown. There were 27 individuals who were fully vaccinated, 20 were unvaccinated, and 15 were unknown.

The town of Aquinnah has administered 656 tests, with four positive results.

The Wampanoag Tribe of Gay Head (Aquinnah) has reported a total of 27 positive cases of COVID-19.

There were 18 positive tests reported at the Martha’s Vineyard Public Schools, from a total of 16,122 tested during the last school year.