Donald Read Shanor of Edgartown and Chappaquiddick, foreign correspondent, author, and former Columbia University Graduate School of Journalism professor, died on August 31, 2021, at his Edgartown home after a brief illness. He was 94. 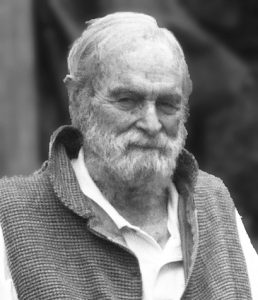 He and his late wife, Constance (Collier) Shanor, first came to Martha’s Vineyard in the early 1970s, and became year-round residents in 1993. Their Pierce Lane home was once an icehouse on Sheriff’s Meadow Pond, and was moved to its present site in the 1920s. To be closer to the ocean in the summer, the Shanors built, with their own hands, a getaway on Chappaquiddick.

Don was born on July 11, 1927, in Ann Arbor, Mich., a son of William and Katherine (Read) Shanor. He was a graduate of Comstock Park High School in Comstock Park, Mich., and the Medill School of Journalism at Northwestern University in Evanston, Ill., in 1951. In 1965 he received an M.S. degree from Columbia University

In 1945–46, Don served in the U.S. Naval Reserve in the Pacific. A lifelong animal lover (devoted especially to Chesapeake Bay retrievers), he frequently regaled his children about the time he adopted a monkey on a Pacific island stop and taught it how to type.

It was at Medill that he met Connie Collier, who would be his wife for the next 66 years. In the early 1950s, the young couple took a freight boat to England to find work as journalists. They lived abroad for several years — for a time, on a houseboat on the Thames River in London — when Don worked for United Press International. Later, as a foreign correspondent for the Chicago Daily News, covering Germany and Eastern Europe, the Shanors lived in Bonn, Germany, and Vienna, Austria. They also lived in Beijing, China, where Don taught journalism at the Chinese Academy of Social Sciences.

Don was on the faculty of the Journalism School at Columbia University from 1970 to 1993, where he headed the international division for foreign students. He was present at the fall of the Berlin Wall on Nov. 9, 1989. In the days that followed, he walked the entire 29-mile length of the barrier that divided East and West Berlin to interview Germans who had lived with the wall since 1961. Along the way, he collected small pieces of concrete rubble to bring home to his children.

He was the author of five books, including “Soviet Europe,” and co-author, with his wife, of “China Today.” At the time of his death, Don was completing his late wife’s biography about Isabel Barrows, America’s first female ophthalmologist.

If he was not writing, chopping wood, or listening to classical music, Don Shanor was likely to be found with a hammer and nails building something. Once, he decided to build his own catboat. It was never sailed, however, though his granddaughter, Zoe Shanor, a frequent companion of his on outdoor adventures, is planning to get it — at last — into the water.

Even in his 80s, he was indefatigable. He looked forward to the Land Bank’s annual cross-Island hike, and enjoyed long rides on his Chinese bicycle, the Flying Pigeon. But there was nothing as wonderful as ice skating with Zoe on Sheriff’s Meadow Pond.

Don is survived by his sister, Alice Marsh of Grand Rapids, Mich..; two daughters, Rebecca Shanor of New York City and Lisa Shanor of Oak Bluffs; and a granddaughter, Zoe Shanor of Oak Bluffs. In addition to his wife, he was predeceased by a son, Donald Jr.; a brother, Richard; and a sister, Katherine Baum. A private celebration of life will be held.

Contributions in his memory may be made to the Sheriff’s Meadow Foundation, Box 1088, Vineyard Haven, MA 02568.