John C. Hartley passed away on August 30, 2021, at Massachusetts General Hospital, after a long battle with cancer. He was 70 years old. 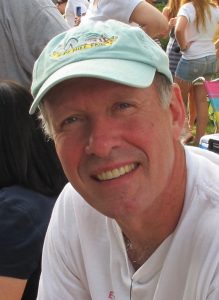 John Hartley was born on Dec. 7, 1950, in Pittsburgh, Pa., hence his passion for the Pittsburgh Steelers and all things sports.

John graduated from Allderdice High School. He earned his bachelor’s degree in mathematics from the University of Pittsburgh, and went on to receive a doctorate of dental surgery (DDS) from the Medical College of Virginia.

He set up his private practice in Northern Virginia, where he became a successful and admired dentist. It was in Virginia where he met his beloved wife Robbie Hutchison. They were married on Martha’s Vineyard on July 31, 1988. After numerous visits to the Vineyard, they decided to make it their permanent residence. In the late 1990s, John set up his dentistry practice on Upper Main Street in Edgartown, and Robbie became a respected landscape designer. John was known for his caring treatment of his patients, and became well-loved by his employees and patients alike.

The Hartleys were often seen walking their dog during lunch breaks or while taking an evening stroll into town. Their dogs, Ginny (famously known for her heart pattern on her side) and Watson, won numerous ribbons at the Agricultural Fair. John also enjoyed playing cards with his friends, a round of golf, and growing tomatoes.

In 2017, they retired to their special winter retreat of Naples, Fla. John continued being active, teaching dentistry and finding more time to play golf.

John is survived by his sister, Barbara Hartley Karnes of Stuart, Fla.; nephews Greg and Brian Poland and their families of Pittsburgh; his father-in-law, Norman Hutchison of Round Hill, Va., and sister-in law, Kathy Sweeney and family of Winnemucca, Nev. He was predeceased by his wife, Robbie Hutchison; father, Clyde Edward Hartley; mother, Elsie Bernadine (Barr); brother, Kenneth Hartley; and nephew, Joseph Poland.

Donations in his memory may be made to the Best Friends Animal Society.

Swimming and running for a cause