Never so aware
of the compass in me. The enormity
of the sky — itself a compass — our canopy
over the Madison Range Mountains.
Within that canopy a bald eagle flies
above the river, alights in a tall pine and
peers at us floating slowly beneath him.

My grandson casts upstream and down-
stream, rainbows the line, jiggles it as we
float over hydraulics and eddies In the
flat-bottomed boat. Our guide Ryan calls
each cast for twelve year old Asi, who just
this instant catches a sixteen inch Rocky
Mountain whitefish, rod tip up and bent on
the left side of the boat, his lucky side.
One photo, then casts for his fifteenth hit.

Fan Ogilvie has published two books of poems, “You” and “Easinesses Found,”; several chapbooks, including “The Other Side of the Hill” and “In this Place”; and a memoir, “Knot a Life.” She is planning to publish a poetry dialogue between herself and Sappho. She lives in West Tisbury with Robin Motherwell Ogilvie, her Irish Russell terrier, and her husband Donald. She facilitates the Cleaveland House Poets poetry workshop, and reads poems regularly at the M.V. Center for Living.

Poets with a connection to Martha’s Vineyard are encouraged to submit poems to Laura Roosevelt at ldroosevelt@gmail.com. 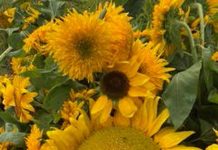