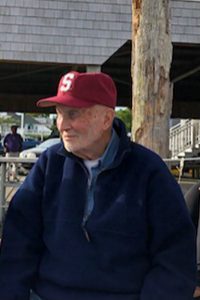 Born in 1938 in Hutchinson, Kans., he attended the University of Kansas, after which he joined the U.S. Navy, serving in Thule, Greenland, before instructing at the Naval Officers Candidate School, and then attending Naval Justice School to become a legal officer for the Navy in Newport, R.I. During this time he met his wife, Jean (Braddon) Lewellyn, and they then headed out to Palo Alto, Calif., where he attended Stanford Law School.

They eventually settled in New Haven, Conn., where Bruce practiced law for the firm of Tyler Cooper & Alcorn for 37 years. He served on the board of Christian Community Action (CCA) a nonprofit organization that provided emergency temporary housing as well as other services to those living in the inner city. He and Jean became regular volunteers for Habitat for Humanity, restoring old houses in low-income neighborhoods. They subsequently became involved with M.V. Habitat for Humanity upon moving to the Island.

Bruce loved playing tennis, skiing, sailing, singing, woodworking, and crossword puzzles. The shared passion that ultimately brought Bruce and Jean to the island was sailing. He often joked that a “landlubbing” farm boy from Kansas, who never set eyes on the ocean until he was 18, was ironically converted into a full-fledged, “wash-ashore” salty sailor. Having cruised the New England coastline with family and friends aboard their Tartan, Jubilate, during summers for over 30 years, Bruce and Jean retired to Martha’s Vineyard in 2004. He fully embraced Island living. Initially getting involved with town government in Vineyard Haven, he served as chairman of the dredge committee, and was later elected to the town finance committee. He was an active member of the Federated Church of Edgartown, not only lending his beautiful tenor voice to the choir, but also serving on the church council and helping out with many legal and financial matters.

Bruce’s love for music, guitar playing, and singing started at an early age. During his time in Newport in the ’60s, he was inspired by the culture and sounds of the coffeehouse folk music scene, and his love for music and singing only deepened over time. He would bring his guitar with him everywhere he went, and was known to burst into song at a moment’s notice. He sang with the a capella group the Off-Sounders in Greenwich, Conn., for more than 20 years before joining the Island Community Chorus and the Federated Church Choir after moving to Martha’s Vineyard.

A consummate tinkerer, Bruce could often be found in his workshop, designing, building, and revising his various creations. His talents in this area lent themselves to Bruce being the de facto handyman to his many friends and family members throughout his life.

He is survived by his wife, Jean; their children, Braddon Lewellyn of Albuquerque, N.M., Megan Lewellyn of Seattle, Wash.. and Curt Lewellyn of Boston; as well as his three grandchildren, Sam, Piper, and Max Shethar, who will always remember their beloved Poppa for his wit, wisdom, and gentle nature.

A funeral service for family and friends will be held on Sunday, Oct. 3, at 1 pm at the Federated Church of Edgartown. Those attending must be vaccinated and wear masks. The service will be streamed live as well as recorded, and can be accessed through the church website.

Donations in his memory may be made to Hospice of Martha’s Vineyard, P.O. Box 1748, Vineyard Haven, MA 02568, or online at hospiceofmv.org/donations; to the Federated Church, P.O. Box 249, Edgartown, MA 02539; or to the National Multiple Sclerosis Society, online at nationalmssociety.org/donate. For online guestbook and more information, visit chapmanfuneral.com.