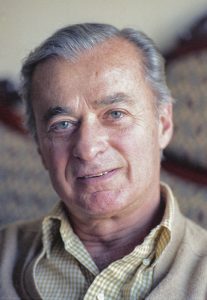 Ralph Charles Franklin was born in Cincinnati on July 13, 1920, the eldest son of Harry and Sophie Franklin, whose own parents came to America from Eastern Europe in the late 19th century. Ralph grew up in Cincinnati, graduating from Hughes High School in 1938, and from the University of Cincinnati in 1942. During his senior year, following the attack on Pearl Harbor, Ralph enlisted in the Marines, and after graduating, began officer training at Quantico Marine Base in Virginia. He was stationed at Camp Pendleton in California as a second lieutenant with the Third Marine Division, and from there he entered the Pacific Theater of World War II, shipping to New Zealand, then Guadalcanal. On Nov. 1, 1943, he took part in the invasion of the Japanese-occupied island of Bougainville in the Solomon Islands, serving as a reconnaissance officer with the 3rd Tank Battalion. Following that successful campaign, Ralph was promoted to captain and stationed on Guam, serving as adjutant to the Marine headquarters battalion.

After the war, Ralph pursued a career in business, while remaining on active reserve in the Marine Corps for another seven years. In 1946, he moved to New York City, attending the Columbia University Graduate School of Business under the GI Bill. While at Columbia, he met his future wife, Mary Elizabeth (Betty) Evans of Madison, N.J., who at the time was the secretary to the university’s director of buildings and grounds. Following his graduation from Columbia in 1947, Ralph worked for the U.S. Rubber Co. (Uniroyal), first in New York, then Singapore. Betty joined him in Singapore, where they were married on Nov. 6, 1948. Ralph and Betty moved from Singapore to Hong Kong, to Manila, back to New York, then to Brazil – first to São Paulo, where son Bruce was born in 1952, then to Rio de Janeiro, where son Andrew arrived in 1953.

Wanting to raise their young family in the U.S., Ralph and Betty left Brazil in 1954 and settled in Cincinnati, where Ralph worked for Ziv TV International, a television production and distribution company, as director of Latin American sales. Son John was born in Cincinnati in 1955, and daughter Nancy followed in 1956. The family moved back East in 1962, settling in Larchmont, N.Y., when Ralph joined MCA as vice president, continuing his pioneering work in the international distribution of American television programs and motion pictures. He greatly expanded this part of MCA’s business, and became president of the company’s international division in 1969, traveling the world and doing business in dozens of countries.

Following a private ceremony, Ralph and Betty will be buried together at Quantico National Cemetery in Virginia.