You know the photo — the iconic image from 1932, in which 11 workers sit atop a steel beam high above Manhattan, casually enjoying a lunch break, variously chatting, munching a sandwich, lighting a cigarette, with nary a thought about their precarious position. In 2012, comedian Kevin Flynn discovered that one of the men was his grandfather (a missing finger led Irish filmmaker Seán Ó Cualáin to identify the man on the far right as Paddy Flynn).

Around that time, Kevin Flynn, a standup comedian, actor, and television host, decided to do some more research on his family history, and from that undertaking his solo show, “Fear of Heights — A Very Funny Phobia,” was born. This weekend, Vineyarders can catch a performance of the comedic show, described as being “based on Kevin’s life and relationship with his tough, Irish Catholic, steelworker roots.”

According to the Martha’s Vineyard Playhouse website, the show “examines the American experience through the lens of [Flynn’s] Irish immigrant family. Flynn’s father and grandfather were both steelworkers, and inspired the title of this work. ‘Fear of Heights’ examines what it means to be a man, and how one generation measures success relative to their forebears.”

The actor and comedian’s life journey has taken him a long way from his working-class roots. Despite the difficulty of a long commute for his father, Flynn’s family moved from NYC to Connecticut to give their kids a better life. Subsequently Flynn was determined, in his words, “to become rich and famous.”

Soccer offered him the first shot at fame and fortune, when Flynn was given the opportunity to attend the University of Massachusetts on an athletic scholarship. From there he went on to play professional soccer, and then transitioned to work as a professional sportscaster and host.

When he realized that he would never become a soccer star, Flynn decided on Plan B — a career as an entertainer. “Friends said it was a pretty s_____ plan B,” he recalls. Yet, despite the odds, Flynn wound up finding success (if not exactly riches) in a lengthy career that has included numerous appearances on network comedy specials, film and TV roles in “The Heartbreak Kid” with Ben Stiller, “Me, Myself and Irene” with Jim Carrey, and “Sex and the City,” among others.

In 1996, Kevin became the host of the Discovery Channel’s “Go for It,” an extreme outdoor adventure show where he swam with sharks, jumped out of airplanes, and scaled dangerous peaks. The show led Kevin to create his first one-man show, “The Go for It Guy,” which won the “Best of Fest” at the Boston Comedy Festival and HBO’s U.S. Comedy Arts Festival in Aspen. A subsequent solo show, “Around the Kitchen Table,” also garnered awards for the comedian.

For many years Flynn traveled from his home in NYC to spend summers on Nantucket, acting in local theater productions. In 2008, the now successful standup comic invited friends from the comedy world in New York to perform on Nantucket in a fundraiser for his newly founded organization Stand Up & Learn, a comedy education program serving Nantucket’s children. From that not-so-humble beginning, the Nantucket Comedy Festival was born, and has been a staple of the summer season on “the other island” ever since.

In his latest show, Flynn honors his family’s strength and resilience, and also gives recognition to the sacrifices his parents made to help him transcend his roots.

The title of the show, “Fear of Heights,” refers not just to the phobia that Flynn has worked so hard to overcome, but also the entertainer’s struggles coping with success. Seems like he has surmounted both, and has gone on to help others find their own path in life as well.

“Fear of Heights,” written and performed by Kevin Flynn, will be presented at the Martha’s Vineyard Playhouse on Oct. 15 and 16 at 7:30 pm. Recommended for ages 16-plus (some language). Proof of vaccination is required. Tickets are $25 for adults, $15 for juniors, and are available at mvplayhouse.org. 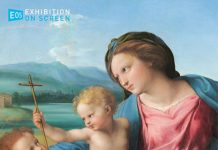 ‘Raphael Revealed’ is a celebration of a great artist