On Tuesday morning, the Steamship Authority board unanimously approved a $119.6 million operating budget for 2022. SSA treasurer and comptroller Mark Rozum told the board the expected operating revenue for 2022 is $123.7 million. This represents an increase of 2.1 percent from the 2021 budget. Rozum emphasized the budget contained no rate increases.

The biggest cost driver of 2022 operating expenses is fuel, Rozum said. He projected a 36.5 percent increase in fuel costs, which will translate into $8.1 million in overall costs in 2022 as compared with just over $5.9 million in 2021.

In other business, the board voted unanimously to award a $9.6 million contract to NextGrid Inc. and Madison Energy Investments of Vienna, Virginia for a solar canopy lease and construction project at the Thomas B. Landers parking facility in Falmouth. SSA general manager Robert Davis said the project would provide an annual rent estimated at $415,000 in the first lease year to $727,705 in the 20th lease year. The project will also convey the ability for NextGrid to sell electricity and net metering credits, at a present value of $654,057.

Davis said the project was the subject of an earlier feasibility study, and a report that came from that study showed the site was suitable for a solar canopy project.

The board voted unanimously to authorize a $1.4 million hull exam and overhaul of the Island Home at Senesco Marine in North Kingston, R.I. The overhaul will include rudder, propeller, and shaft maintenance, application of coatings, structural steel renewal, a bow thruster overhaul, and bow and stern door overhauls.

Out of 10 shipyards that received bid packets, two submitted bids, Davis told the board.

Ahead of the vote, New Bedford board member Moira Tierney noted there was a $100,000 gap between the winning bid (Senesco) and the other bid (Thames Shipyard). She described Thames as a shipyard the SSA “seemed to have a lot of good luck with.” Conversely, she said, “We’ve had some issues with Senesco.” She asked Davis if Carl Walker, former SSA director of maintenance and engineering, was working at Senesco.

“I believe Mr. Walker works for them, yes,” Davis said.

Walker left the SSA at the very start of 2020. The SSA and Seneco had a major falling-out with each other over the fraught $18 million midlife overhaul of the Martha’s Vineyard in 2018. Later, after having inked a contract with Senesco to overhaul the Katama, the SSA had a squabble with the Rhode Island shipyard over that vessel, and in the end it was sent to Thames Shipyard instead. A Senesco spokesman told The Times in 2020 Senesco was unaware of any procurement or ethics issues related to Walker and the Katama.

Tierney asked if a $100,000 difference in the bids when comparing the two shipyards wouldn’t make Thames’ bid the more responsible bid, as opposed to Senesco.

“Since the issues we had with the Martha’s Vineyard, we have sent other vessels to Senesco for repairs and overhauls,” Davis said. “Their proposal met the requirements for it to be a responsive bid. And thus the staff is recommending that they be awarded the contract.”

“I’d like to add in also,” Mark Amundsen, SSA director of marine operations, said, “I think it’s important for us to have multiple dry-dock companies that work with us in the event that we have a situation of emergency dry-docking. Also we’ve done contract modifications and increased the liquidated damages to $10,000 a day … I feel comfortable to go with Senesco Shipyard based on this, as we do need to develop another good shipyard other than Thames Shipyard.”

The board took a major step toward the creation of a new website and a new mobile app, with a unanimous vote to award a $2 million contract to ADK Group of Boston to develop both.

Updated to correct the name and location of Madison Energy Investments. 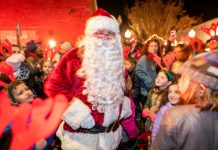