Evelyn Susan Seeman Clegg died peacefully of an illness at her off-Island home in Norwell on October 16, 2021, surrounded by her family. 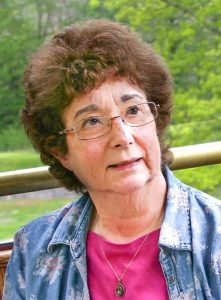 She was born in Elmhurst, Queens, on April 22, 1943, to John and Mary Seeman. She spent her formative years around New York City, graduating from Yonkers High School in 1961. She matriculated at Colby-Sawyer College in New Hampshire, earning an A.A. degree, then graduated from Boston University In 1965 with a degree in English. There she met her future husband, Winston Clegg, a lifelong seasonal resident of Chilmark.

Marriage took Evelyn, known to her family and friends as “Evie,” traveling around the country to places like chilly Tomah, Wisc., and sunny LA while holding legal secretary positions with major law firms. Her early work ranged from the Charles River Park development in Boston to Manchester Community College in Connecticut. After starting a family with two boys, she slowed down by volunteering at the South Shore Natural Science Center in Norwell. During this time, she was very active with youth educational and social activities. She later served full-time as the assistant to the director of the Science Center.

Evelyn later re-entered the legal field as a paralegal and office manager for two law firms in Plymouth County, and later for Morse Shoe/J. Baker in Canton. Hired by Stone & Webster engineering company in Boston, she served the general counsel becoming the stock option

administrator and assistant corporate secretary, and earning a reputation for “not letting anything get by.” She sat on the board of directors, and remained with the company after it merged with the Shaw Group. Evie retired in 2012.

For a private person who kept to herself, she had an impressive impact on those she met. Described as an “unstoppable force,” when she talked, people would listen. An avid reader, a

culinarian, a gardener, and tireless interior decorator, Evelyn spent much of her free time crafting beautiful and inviting homes. She constantly updated her house in Norwell, and kept the

bittersweet at bay in Chilmark, her summer home. A longtime subscriber to the Boston Symphony, she was invigorated with music concerts and art exhibits, including many of the Frank Lloyd Wright houses in the Eeastern U.S. She loved walking to Stonewall Beach, and spent many an hour exploring the natural habitats on the Island and throughout Eastern Massachusetts.

Devoted to her parents’ family, she would often make a pilgrimage to their homestead in the mountains of Pennsylvania’s Sullivan County, visiting with her aunts, uncles, and cousins. Spring through fall saw her spend time living with her Island in-laws, Helen and Merritt Clegg, as well as visiting Vineyard cousins and relatives.

She is survived by her husband Winston; her sons Jeremy and Stephen; and by her sister Barbara and brother-in-law Richard Lounsbury of Carlinville, Ill.

A celebration of Evelyn’s life will be held in Chilmark in the late spring, with time and date to be announced. Updates, additional information, and an online guestbook can be found at mcnamara-sparrell.com/obituary/Evelyn-Clegg. She was a consistent supporter of the causes in which she believed; donations in lieu of flowers should be sent to Habitat for Humanity International, 322 West Lamar St., Americus, GA 31709.