Joan Karasik passed out of this world on the evening of Nov. 3, 2021. Her death was peaceful. She was kind, hardworking, open-hearted and open-minded, endlessly curious, and a steady and successful advocate for justice. 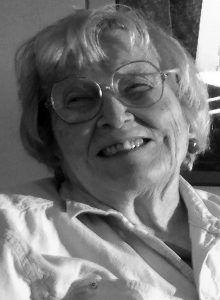 Joan’s library ranged from the works of Nabokov to histories of her hometown of Manhattan. Her fix-it guides were especially well-used. Over the years in her orderly workshop, chairs were recaned, sofas reupholstered, and tables refinished. She rebuilt the same parlor pump organ three times until she got it right.

She played cutthroat Scrabble, and never left a New York Times crossword puzzle unfinished. Joan mowed her own lawn with a push mower until well into her 90s, and enjoyed engaging visiting adult children in work projects. While she loved museums, concerts, and the theater, she was perhaps happiest at yard sales, at which she rescued many old-style and extremely helpful tools as well as amassing, one by one, an impressive collection of vintage bottle openers.

Her son David was born with an autism spectrum disorder; her sister Cornelia with multiple disabilities from birth. Throughout Joan’s life she stood up for the rights and dignity of those with less power, especially those with disabilities. In that fight, Joan, along with her husband Monroe, was an unstoppable force. They were among the founders of the ARC of Maryland, and in honor of the couple’s advocacy, two inclusive childcare centers were named the Karasik Centers.

She received many honors in recognition of her organizing and committee work, but the awards were never the point for her: She just wanted to get back to her desk and figure out how she and others could do more.

In addition to innumerable policy position papers, petitions, and practical recommendations for better services, her writing includes the inaugural edition of “Going Places with Children: A Guidebook to Washington, D.C.”; “Sixty-Four Years of Medical Practice (1896-1960)” (co-authored with her father, Henry Pascal); her own “Pascal Family History”; and a theatrical adaptation of Jean Merrill’s “The Pushcart War.”

Dinner with Joan, on a porch when weather permitted, started with drinks, continued with a great home-cooked meal, plenty of wine, and discussion of all aspects of human endeavor. Joan Karasik was one of the world’s great listeners. Her curiosity inspired the curiosity of others. At her table, people thought a little bit more about what they were saying, and whether they’d thought hard enough about it. And when she spoke, everybody listened.

Joan Karasik’s three rules for a happy life were: “Travel; take a pause and have a drink every evening before dinner; and stay out of your children’s business.” Agree with her or not, that’s our Mom!

A memorial will be arranged for spring 2022.

Contributions in her memory can be sent to ARC Montgomery County; CSAAC; and the Vineyard Independence Partnership.