Paul J. Watts of Long Island, Maine, passed away on Nov. 11, 2021, at the age of 71, of rapid onset and progression vascular dementia. 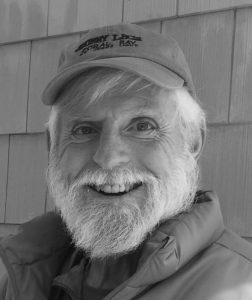 Paul was born in Shepperton, England, in February 1950, and immigrated to the U.S. in 1952. He grew up in Cape Elizabeth, Maine, where he held the record for the most number of goal assists in soccer for over 25 years. While in high school, he met the love of his life, Di, and

married her in 1970. Paul and Diane married young. Their love story is truly one for the ages. Their love and patience and commitment to each other never wavered.

Paul started his career in banking shortly after marrying Diane, and he worked tirelessly to help others realize their dreams until retiring to Long Island, Maine, in 2015. He was always happy to assist others reach their fullest potential.

Paul to many was a banker and a friend. He always fought fiercely for his customers. He gave people the courage to take risks, and he encouraged them. He always tried to think outside of the box. The traits he passed on to his daughters are the same that he instilled in his clients: Have faith in your own ideas and your own abilities. You need to take a leap if you want to fly. Treat others as you would want to be treated.

Paul taught his girls the pleasure of philanthropy, and to always put others first, to do for oneself, and to be kind. He often remarked that the world is not black or white, but shades of gray. Always stay curious. You get more bees with honey.

Paul was a selfless volunteer for numerous nonprofits. He and Di sponsored two young refugees from Poland when the girls were young, and hosted several exchange students.

Some of the organizations of which he was most proud included Big Brothers, Big Sisters; the M.V. Chamber of Commerce; selectman on Long Island, Maine; and the M.V. Rotary Club. There he won the Governor’s award for his work with a sister club in Lima, Peru. Paul was instrumental in providing medical equipment, wheelchairs, and computers for an orphanage, which allowed them to learn and implement hydroponic gardening and animal husbandry to become not only self-sufficient but a major provider to local food stores.

Paul was an avid sailor, leading trips to the BVI and up the coast of Maine. Paul was commodore of Centerboard Yacht Club, and valued all of the friends he met along the way. Paul was a true islander, something he achieved because of his love of Di. “What is an Islander? One who lives a step away from the world — by choice entirely surrounded by water. Whose activities are governed by the weather, the sea, and a boat schedule. For once you have slept on an island, you will truly never be the same.”

He was grateful for his opportunities, and was always looking for ways to pay it forward. Paul was larger than life. His eyes sparkled with love and mischief. His quick wit and generosity will outlive him.

The family would like to extend a special, heartfelt thank-you to all the friends and staff at Bay Square and Compassus Hospice for helping Paul on his journey with dignity and grace.

He is survived by his devoted wife, Diane, of 51 years. He leaves behind two loving daughters, Kimberly Peaslee of Concord, N.H. (and grandson Leo), and Jennifer Pillsworth (and husband Kenneth) of Vineyard Haven; as well as by extended family and friends.

His life may have been cut short, but he lived it to the fullest. A celebration of life will be held both on Martha’s Vineyard and in Maine in the spring of 2022, because Paul lived for entertaining, and mustn’t be limited to just one celebration! In lieu of flowers, please donate to alz.org, so that others may live a long and happy life.

Arrangements are under the direction of the Conroy-Tully Walker Funeral Home of Portland, Maine. To view Paul’s memorial page, or to share an online condolence, please visit conroytullywalker.com.