Kent Allen Healy, West Tisbury select board member, passed peacefully, surrounded by his family and friends, on October 31, 2021. He was 89 years old. 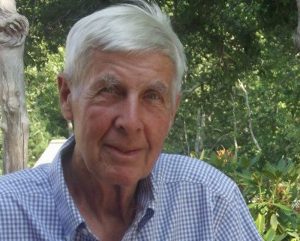 Kent was born in New Haven, Conn., to Ruth Emily Allen Healy and Kent Tenney Healy on Sept. 30, 1932, the third of four siblings. He attended the Foote School K-8, and Hotchkiss Preparatory School prior to being accepted at Yale University. Following his first and final year at Yale, Kent began work on the Island he would eventually call home.

From March to June of 1952, Kent worked as an oyster fisherman for Quansoo Fishery. Two months later, he joined the Coast Guard, where he would serve four years, from 1952 to 1956. It was during this time that he happened upon teenage hitchhiker Maureen Flanders, whom he would later marry. Kent and Maureen wed in November 1957, and spent 64 years rarely leaving each other’s side. Together they raised five children, William, Elizabeth, Jonathan, Samuel, and Allen.

While embracing his new role as father and husband, Kent found time to complete his studies at Worcester Polytechnic Institute and Massachusetts Institute of Technology, earning a doctorate in civil engineering from MIT. In 1964, Kent returned to Connecticut with his young family to begin his professorship at University of Connecticut, where he would teach civil engineering for the next two decades. The family spent every summer at a camp on Quansoo Road, which was powered by windmills and solar panels long before such environmentalist measures became commonplace. Upon his death, Kent held the honor of most senior founding member of the esteemed Union of Concerned Scientists. Kent’s concern for the environment informed all of his endeavors, and sprang from deeply humanist sensibilities.

In 1983, Kent and Maureen made the Island their permanent home. While continuing his instrumental work off-Island on such projects as the Rhode Island Jamestown Bridge, Kent gradually established his private engineering practice, and his prominent role in the West Tisbury and Martha’s Vineyard community. On his own volition, Kent measured and tracked the Vineyard water tables for over 50 years, and supervised the health of the Tisbury Great Pond.

Kent Healy will be remembered for his unwavering generosity, gentle disposition, and devotion to the well-being of his neighbor. He joyfully dispensed his invaluable knowledge and wisdom upon anyone who found themselves in need of his expertise; Kent provided countless hours of affordable consulting services, and in exchange, he seldom wanted for eggs, oysters, cordwood, or wild blueberries.

Kent was predeceased by five months by his beloved wife of 64 years, Maureen Flanders Healy, and four years by his dear brother Willie Healy. He is survived by his loving sisters, the Rev. Ruth Healy of Stone Mountain, Ga., and Sylvia Healy Lipnick of New Haven, Conn., and dear family friend Judy Elmer of Vineyard Haven, children Bill Healy of Chilmark, Beth Healy and her husband Anthony of Vineyard Haven, Jon Healy and his wife Lisa of Chilmark, Sam Healy and his wife Megan of Melrose, and Allen Healy and his wife Caitlin of Chilmark; and by grandchildren Alayna Cohen, Jonathan Cohen, Quinn Healy, Troy Healy, Molly Healy, Keith Healy, Everett Healy, and Kent Healy, as well as a multitude of nieces and nephews on both the Healy and Flanders sides, and many deeply appreciated friends.

A celebration of Kent and Maureen’s lives will be held at the West Tisbury Agricultural Hall, Dec. 4 at noon. We request attendees be vaccinated.