Carol Besse Eno of Vineyard Haven passed away peacefully, surrounded by her family, on Nov. 10, 2021, in her home on her beloved Island of Martha’s Vineyard. 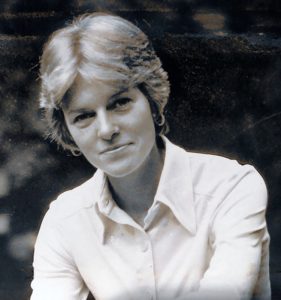 Born on March 6, 1946, in Fort Lauderdale, Fla., to Arthur Lyman Besse and Virginia Weston of Weston and Vineyard Haven, she grew up in Weston, and graduated from Weston High School. She received an undergraduate degree from the University of Hartford, and a master’s degree in public finance there.

A dedicated professional, Carol spent her career at the Bank of Boston, Sanwa Bank, and Chubb Insurance. She was greatly civic-minded. She was involved in childcare and early education while in Wayland; a founding member of the Tisbury Water Works on Martha’s Vineyard, working toward the conservation of Tisbury’s waterways; she was a founding member of the Simsbury Land Trust in Simsbury, Conn., dedicated to land conservation there; and she was an active member of the League of Women Voters. As a longtime resident of Simsbury, Carol served a two-year term as a select board member there.

While she spent a large portion of her life in the greater Boston and Simsbury areas, Martha’s Vineyard was Carol’s summer home throughout her life. Her grandparents, Mr. and Mrs. Arthur D. Weston of Edgartown, and Mr. and Mrs. Arthur Lyman Besse of Oak Bluffs, were lifelong summer residents and retirees on the Island, and her parents, originally of Weston, met on the Vineyard and eventually retired in Vineyard Haven. Her mother, an accomplished sailor at Edgartown Yacht Club, won the Prosser Cup an extraordinary seven times, and went on to win the Adams Cup (Women’s National Championship). Carol grew up racing Vineyard 15s and Solings at the Vineyard Haven Yacht Club with her brother Stephen Besse and sister Anne Besse Shepherd, alongside many cousins, aunts, uncles, and friends.

At Carol’s request, a private family burial was held at the Simsbury Cemetery. The Rev. Kevin Weikel officiated.