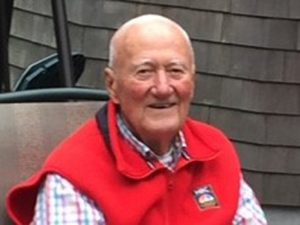 To the national and international scientific community, he was the director of the Massachusetts Lobster Hatchery and Research Station, and a pioneer in lobster research, author of many research publications, and recipient of countless awards. To the Vineyard community, he was a civic leader involved in the startup of Felix Neck Wildlife Sanctuary, fundraising for musical instruments for kids in the Tisbury and up-Island schools, and helping to create Tisbury’s Veterans’ Memorial Park. To the members of Farm Neck, he was the unassuming golfer who shot four holes in one, and shot his age for many years after 75. To his family he was the maker of the best pickles and strawberry-rhubarb jam, master brewer of beer, a thrift shop junkie, and a man who quietly loved his family. And to countless people in the street, behind a counter or directing traffic, he was the man who, with a wink, drew a smile from everyone when he gave them a Werther’s candy.

John was born on March 23, 1922, at home in Oak Bluffs. He was the youngest child of A. Elizabeth (Fraser) and John H. Hughes, joining his sister Selma (Sally) and brother Robert (Bob). As a kid he helped his parents operate the Oak Bluffs Bath Houses, which were just west of Inkwell Beach. There were more than 25 claw-foot bathtubs that he was responsible for filling every day with heated seawater. In his later years, John still remembered walking on Circuit Avenue and hearing older men in town call out, in broken English, “Johnny, is the vader hot yet?”

John and his Boy Scout troop camped in the tunnel in Oak Bluffs, and used candles salvaged from the wreck of the Port Hunter. After the summer folks had gone, he and his friends would play “roofies,” jumping from roof to roof in the Campgrounds and climbing the columns of the Tabernacle. As a teenager, John was a volunteer fireman for Oak Bluffs in the Hydrant Hose Company, two buildings up from his family’s home at the corner of Circuit and Pequot avenues. Later he worked in his dad’s plumbing business, and in the family’s ice cream parlor and restaurant, where daRosa’s is now.

During World War II, as a college sophomore, he enlisted in the Navy and served as captain of a minesweeper, keeping Boston and Norfolk harbors free of mines.

At the age of 25, he completed college at UMass, majoring in wildlife management, made the dean’s list, and wrote his senior thesis on the American lobster. Graduating in 1947, he came home and worked in the family plumbing business.

He met Virginia Shanley, a teacher, in Oak Bluffs at Nellie Amaral’s Christmas party, wooed her shooting rats at the Oak Bluffs dump, and married in October 1948.

He learned that his UMass professor had sent his lobster paper to the Massachusetts Department of Fish and Game. In 1950, he was asked to oversee the building and operation of the first Massachusetts Lobster Hatchery and Research Station. John grew that experience through various positions as a marine biologist to become the director of the Lobster Research Station in 1975. He served in that role until he retired in 1984.

He was the first to successfully breed the American lobster in captivity, with the goal of restocking the populations in New England waters. To that end, he worked tirelessly to selectively breed lobsters of a solid blue color, in order to track the restocking effort.

During his accomplished career, he received many awards, recognitions, and citations for all his contributions to aquaculture. His most recent honor, at the ripe age of 90, was the renaming of the Commonwealth of Massachusetts Lobster Research Station to the John T. Hughes Research Station. His work is widely cited, with 25 published articles. His peers praised him for his innovative and practical spirit, mentoring of younger scientists, and willingness to share information.

His work brought him to aquaculture conferences around the world, traveling to more than 20 different countries to consult with governments and agencies on his seawater tanks and cultivation techniques.

He appeared in two different National Geographic publications, one Life magazine publication, and was a guest on the 1960s TV show “What’s My Line?”

He explored the deeps in the Alvin, the submersible which found the Titanic. He consulted with Jacques Cousteau and his son, Phillipe Cousteau. He was hosted in Tahiti by Marlon Brando, who wanted to potentially bring aquaculture industry to the Tahitian people. He was even consulted by Julia Child when she was looking for guidance on the most humane way to cook a lobster.

John was predeceased by his wife Virginia, and his son John Jr., and is survived by daughters Patricia and her husband Hal Minis, Sally and her wife Elaine Merritt, and Ellen and her husband John Gallagher. He is also survived by his son’s children, Kate, Oliver, and Thomas; and by his step-grandchildren, Sarah, Sophie, and Mindy and their families.

We will be celebrating John’s life in spring 2022.