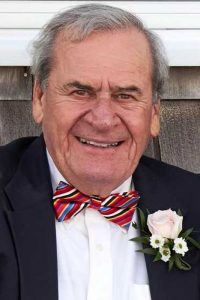 Born in Mansfield, Warren was a graduate of Wentworth Institute and Northeastern University as a metallurgical engineer. He worked for Leach and Garner for more than 20 years, and was actively involved in the Professional Jewelers Association.

In 1963, Warren married Judy Barney Morse. They settled in Attleboro, where they raised their family, were active in their church, and created wonderful memories with their many friends. Whether it was traveling abroad, working as a craftsman on projects with the Do-Dads, or playing bridge with the Grand Slammers, there was always fun to be had with Judy and Warren. Humor and laughter followed him everywhere he went.

In retirement, Warren and Judy moved to Martha’s Vineyard. A great day on the Vineyard often involved clamming (his license plate was “CLAMAH”), or some other type of island exploration and adventure.

It was on the Island where Warren was blessed to meet the second love of his life, Gail Farrish. They were married in 2019. Together, they reveled in the lives and accomplishments of their children and grandchildren. Holidays, cookouts, and Sunday dinners were always filled with the noise of family and laughter. Their love was true, deep, and obvious to anyone who saw them holding hands, or saw the way they looked at each other.

Warren leaves his wife, Gail, his three children and eight grandchildren, all who loved sharing their lives and stories with him. He is survived by his daughter Karen (Morse) Girouard, her husband, Bill, and their four boys, Thomas, John, Teddy, and Charlie; by his son, Chris Morse, his wife Sheila and their three daughters, Katie, Andrea, and Juliet; by his daughter Robin (Morse) Nagle, her husband Kevin, and their son Alex. In addition, the extended family includes Heidi and George Laub, and Kristin and Tiger Shaw and their children. He is also survived by his sister, Jean Monroe of Taunton; by his brother, Kenneth Morse and his wife, Cheryl of North Easton; and by many other nieces, nephews, and longtime friends. Perhaps it is fitting that he died the day before Thanksgiving, for all of us who knew and loved him are thankful for his presence in our lives. He will be deeply missed.

In lieu of flowers, donations can be made to the Martha’s Vineyard Museum, 151 Lagoon Pond Road, Vineyard Haven, MA 02568, or mvmuseum.org.

A celebration of life is planned for early next summer.