In boys play at the West Tisbury School, the hometown Hawks topped the Oak Bluffs Blazers, 47-37, making amends for a 12-point loss in Cottage City two weeks ago.

The hustling Hawks jumped out to a 14-4 lead, frustrating OB with a two-three zone. The Blazers played better as the game went on, and switched to a pressure defense, but were plagued by turnovers, and 7 for 17 shooting from the free throw line. 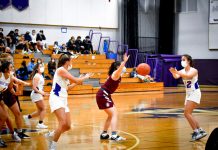