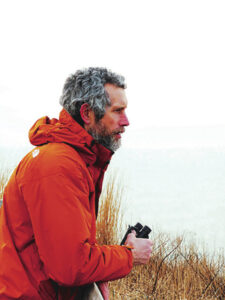 Ken Neagle, artist, poet, naturalist, biologist, farmer, kind and gentle soul, passed away peacefully at home on Jan. 13, 2022, in Vineyard Haven after a long journey with Parkinson’s disease and Lewy body dementia. He was 67 years old.

Ken was born in Winchester, the son of Kenneth Howard Neagle and Delores Cuoco, and spent his childhood hiding in the woods and fishing with his brothers and cousins. He lived near both his maternal and paternal grandparents, and remained close to the natural world through their influence, forever curious about and reverent toward plant and animal life, and committed to growing and making his own food when he could.

He graduated from Virginia Tech, where he studied biology, and later enrolled in the fine arts department at Murray State University in Western Kentucky, a state he lived in for more than 30 years. He worked as a farmhand, chimney sweep, substitute teacher, caretaker, and carpenter, as well as a volunteer for the Kentucky Waterways Alliance. At Mammoth Cave National Park, he worked for many years doing maintenance and historic preservation on the park grounds, trails, and within the caves, a job he loved. His work history reflects his many skills and interests, as well as his respect for the ability to make a living doing honest work, and his commitment to being both independent and productive.

On his own small farm in Hart County, Kentucky, he planted 1,000 trees every summer for 10 years, making a forest home for birds and wild animals. On Martha’s Vineyard, where he lived for the last decade of his life, he worked seasonally with the Trustees of Reservations and Sheriff’s Meadow Foundation, monitoring shorebirds and maintaining hiking trails, and volunteered for the Nature Conservancy and the Winter Flounder Project.

Ken Neagle was a singular person, still when the rest of the world moved around him, listening when no one noticed a sound. He had a unique appreciation for others, and connected with people in a genuine, compassionate way. His unbounded laughter made other people smile, and his quiet presence inspired serenity. He had a need to be in nature every day, and would stride into the woods without a backward glance, his long legs making it impossible for anyone to catch up.

As he grew increasingly debilitated by Parkinson’s, his wife of 22 years, Jane McTeigue, made it possible for Ken to live his life with fullness and joy. Over the last few years, he continued to sketch and make collages, adding to his collection of found objects from nature walks. His work has been exhibited at the Featherstone Center for the Arts in Oak Bluffs and Mocha Mott’s in Vineyard Haven. As his illness progressed, he found community and support at the Martha’s Vineyard Center for Living, where his care and attention to details — in people, nature, and art — were cherished.

In lieu of flowers, memorial donations may be made in Ken’s name to the Trustees of Reservations or the National Forest Foundation.