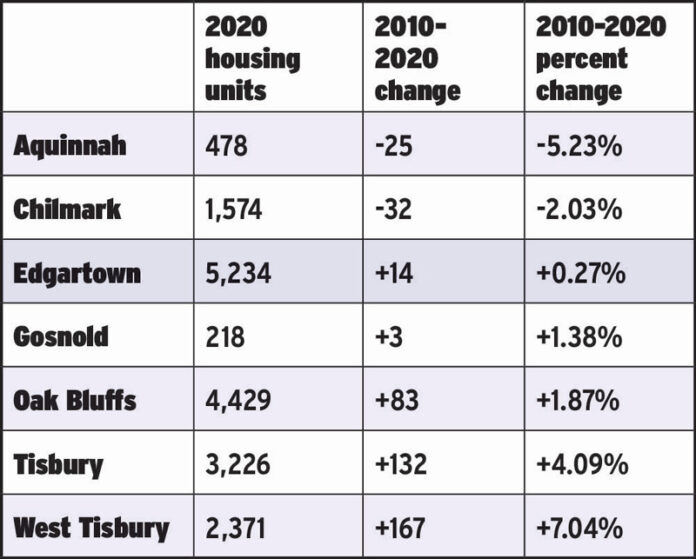 New data available from the U.S. Census show the Island housing stock has increased only slightly, and is far outpaced by the Island’s population growth over the past 10 years.

According to the data, for the first time in 50 years, Martha’s Vineyard’s housing stock shifted from seasonal to year-round occupancy at a narrow 51 percent.

Between 2010 and 2020, Dukes County’s population rose by 25 percent, while housing grew by only 2 percent. In the past decade, housing units decreased in Chilmark and Aquinnah, but increased in other Island towns. The accompanying chart shows housing units by town in 2020, their 10-year change, and their 10-year percentage change.

Speaking to The Times by phone, the Martha’s Vineyard Commission’s economic development and affordable housing planner Christine Flynn said the information was released by the U.S. Census Bureau at the end of August. The commission worked with the University of Massachusetts Donahue Institute to evaluate the data.

Flynn said the rise in year-round homes could be second homeowners opting to stay on the Island, especially with many employers allowing remote work.

“For the first time in five decades, there was a shift of majority seasonal to majority year-round at 51 percent,” Flynn said. “Clearly that’s an indication there was an increase in population.”

She also suggested that some of the population increase could be attributed to how the census was conducted during the COVID-19 pandemic. The census used online signup, and allowed for a longer period to collect data.

With the data in hand, the commission has notified all town administrators, housing committees, planning boards, finance committees, the county, and others that they can make a presentation or give an overview. More data will be available this fall.

The census data shows a loss of 25 and 32 homes in Aquinnah and Chilmark respectively. Flynn said the data is showing “housing unit loss between one Census and the next.”

“This could be due to either actual demolitions or conversion of multi-units to single units. For the Vineyard, a residential demo would usually be replaced with a new home,” she said.

The Census could also have taken a different approach toward what counts as a viable housing unit in 2020 versus 2010.

“While the definition did not change from Census to Census, the method of enumeration shifted to mostly ‘in-office address canvassing,’ meaning Census workers were validating addresses —  using records such as USPS, state-submitted records such as E911 and assessor’s data statewide, and town-submitted records (through Census LUCA Program as opposed to an army of ‘on-the-ground’ Census workers looking at buildings,” she said.

Flynn praised the work of UMass Donahue Institute and the U.S. Census. “The information is vital to MVC planning work,” she said. “All of our work with the towns has to be data-driven, so the information we collect is extremely important to water quality and housing.”

At the national level, the country’s population increased by 22.7 million people, from 308.7 million to 331.4 million. Massachusetts was the fastest growing state among Northeastern states, with a 482,000 person increase pushing the population over 7 million. The 7.4 percent growth over 10 years is the fastest growth the state has seen since the 1980s.

Nantucket and Dukes counties had the first and second fastest population growths by county since 2010. Nantucket increased by 40 percent, and Dukes increased by 24.6 percent.

According to census data, the Cape and Islands saw rapid growth in the 1970s, which saw a 46 percent increase in population.

“Looking back historically, the Island isn’t a stranger to population and housing growth,” Flynn said.

Updated to clarify the loss of housing units.- Ed.