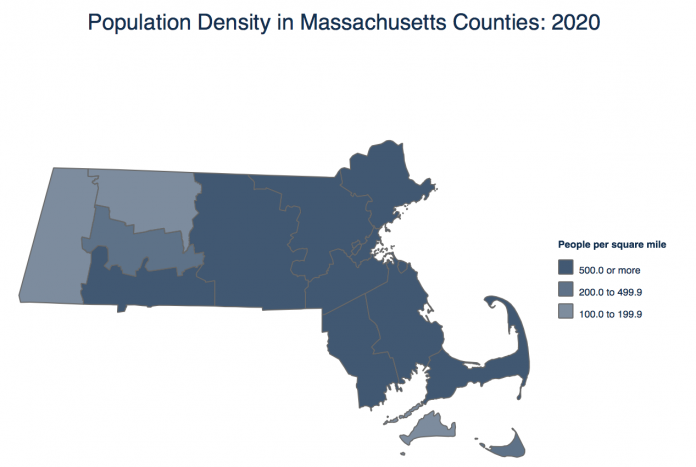 Keith Chatinover, a county commissioner who led the effort to get people counted on Martha’s Vineyard, said it’s a big deal that the population now exceeds 20,000.
“I think it confirms what I heard while I was leading this effort, which was that we had an undercount in 2010,” Chatinover told The Times. “This was the most concerted effort we’ve ever had on the Island to get people to take the Census, and it clearly paid off.”

Along with being used to determine federal grants, the data is also used to draw congressional lines.

According to the State House News Service, the Census data will likely require the districts of U.S. Rep. Richard Neal and U.S. Rep. Jim McGovern to be expanded in size because of their population growth over the past decade.

According to the news service, Secretary of State Bill Galvin said Thursday afternoon that Massachusetts now has nine cities with more than 100,000 residents, and Worcester, the state’s second-largest city, has surpassed 200,000 residents for the first time. “We’ve had significant changes within our state. We’ve seen cities grow dramatically … Many of the suburban communities grew as well,” Galvin, the state’s liaison to the Census, said.

While Dukes County saw a significant increase in population, Nantucket County led the way with a 40.1 percent gain — an increase of 4,083 people, according to the data.

The Special Joint Committee on Redistricting, led by Assistant House Majority Leader Michael Moran and Senate President Pro Tempore William Brownsberger, has already held more than 18 hearings on the redistricting process, and is expected to hold more public hearings once its proposed district maps are available.

Moran told the News Service on Thursday that the committee’s third-party vendor is working now to put the latest Census data into a format that meets the committee’s parameters. Once it has, lawmakers will begin diving into the numbers and digesting it with the testimony from redistricting hearings.

But he is also mindful of the Census Bureau’s plan for another data release — the Census says it will be the same data, but presented in different formats — by Sept. 30. Moran said the committee has to use official Census data, and “given the Census’ credibility in the last year and a half,” he is not considering the data released Thursday to be the official numbers, the news service reported.

Updated to include more data, as well as information from the State House News Service. Also, updated to correct an early version that provided incorrect population numbers for the state.