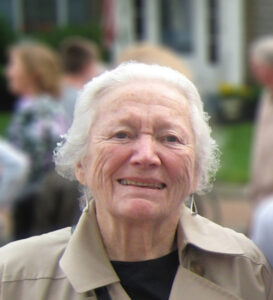 She was born in St. John’s, Newfoundland, on March 9, 1920, to Edward J. Coefield and Francis J. Coefield. The family later moved to Maryland and New Hampshire, where Margaret attended the Pinkerton Academy in Derry. She graduated from Dorchester High School for Girls in 1937, and attended stenotype school in the evenings in Boston for two years. Margaret also took classes at Quincy Junior College, Massasoit Community College, and Bridgewater State College, and held various administrative positions in the medical and legal fields.

Eventually, Margaret moved to Hingham to raise her five children. After they left for school, she spent quiet moments playing the piano and tending to her garden. Margaret’s children, grandchildren, and great-grandchildren became her proudest achievement; she cherished and celebrated their accomplishments, no matter how small they seemed. They felt safe and loved in her fiercely protective, highly observant presence, and knew she treasured the time they spent together. Two of her favorite things to enjoy while living in Hingham were Hornstra’s milk in glass bottles, and anything from French Memories Bakery in Cohasset.

Margaret was also an accomplished photographer. She brought her camera on trips to Europe and Mexico, developing images in the darkroom in her house and winning awards with her Boston and South Shore camera clubs. Even more awardwinning in the eyes of her family: her baking, with Key lime pie, rhubarb pie with homemade whipped cream, and strawberry shortcake as her specialties. She spent many hours researching her family ancestry, survived two pandemics, and drove her Volkswagon well into her 90s. She was a loyal fan to both Tiger Woods and Tom Brady, forever cheering them both to victory!

During the last 20 years of her life, Margaret lived in Edgartown on Martha’s Vineyard, where she enjoyed life to the fullest. Being in her 80s didn’t slow her down one bit — the list of activities and organizations she supported is endless, but some of her favorites were helping at the Council on Aging, visiting the Edgartown library, and attending her granddaughter Zoe’s softball games, where she became an honorary member of the team, the Creamers. She adored Murdick’s Fudge, meals from Little House Café, Main Street Diner, and the Black Dog Tavern. Her favorite activity around Christmas was to take a drive around the Island to see all the towns showing their holiday best. She was often spotted viewing the beautiful gardens in and around Edgartown, especially enjoying all the summer roses in bloom.

She also had a soft spot for her two dogs, Shannon and Charlie, and birds. Margaret often took her relatives to Mass Audubon properties, and saved leftovers in foil to later feed to her winged friends. There was no better place for her to enjoy nature than Martha’s Vineyard, where she moved later in life to be closer to her family — and to consistently beat them at gin rummy. She even brought some of her bulbs and rose bushes from Hingham to her house in Edgartown, and mastered various technologies to stay in touch with family members.

When asked if she had a secret to reaching 100, Margaret responded, “I don’t know, but I eat a lot of butter and sugar.” Her resilience, strong will, creativity, and love and pride for her family shone through in all that she did.

“Many women have done excellently, but you surpass them all.” –Proverbs 31:29