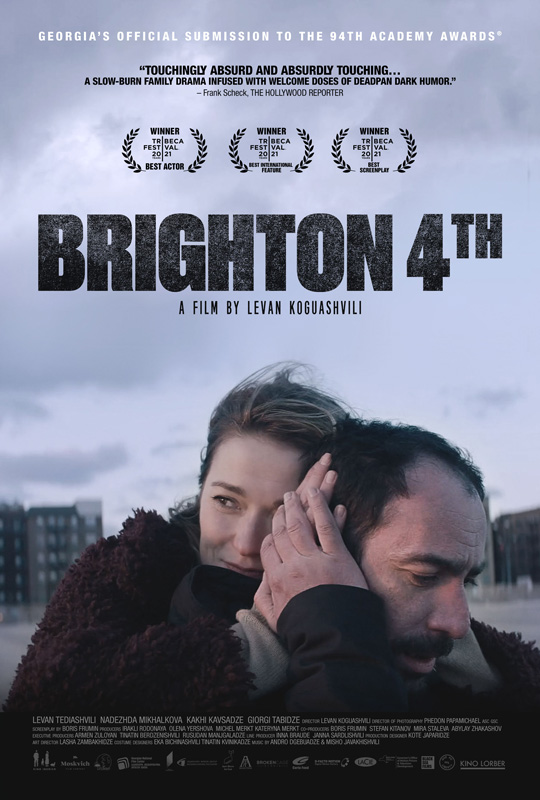 ​“Brighton 4th” comes to the M.V. Film Center on Thursday, March 31. This film enters the world of Georgians who have established themselves in the Brooklyn neighborhood of Brighton on 4th Street. The film is a multiple awardwinner, including three from the Tribeca Film Festival: Best International Film, Best Actor (Levan Tediashvili), and Best Screenplay. It also earned an Oscar nomination for Best International Film.

​Directed by Levan Koguashvili, this poignant story begins in the Georgian capital of Tbilisi, with retired wrestler Kakhi, played by Levan Tediashvili, who was actually a former Olympic and world champion wrestler. Kind-hearted and loving to his wife and later his son Soso (Giorgi Tabidze), Khaki packs three wheels of Georgian cheese into his suitcase and heads for the Brighton neighborhood in Brooklyn where his son now lives.

​Once in Brighton, Kakhi stays in the boarding house with his son. He learns that Soso has abandoned his medical studies, and acquired $14,000 in gambling debts instead. It also means he cannot marry Lena (Nadezhda Mikhalkova) with the $15,000 necessary to earn a green card. His father gives him $2,000 as partial payment of his gambling debt to mobster Amir (Yuri Zur), but instead Amir demands the entire $14,000. So Soso ends up gambling away the $2,000, then ducks into Lena’s apartment for safety. He still gets beaten up, but a devoted Lena patches him up.

In this way, the world of Georgian émigrés comes alive. What may seem like a grim set of events turns warm and friendly instead. The viewer observes a collection of Georgian men — it is a story essentially about men — including several musicians in the boarding house where Nana (Irma Gachechiladze) is in charge. This group of expats sits around a dining room table, drinking and singing Georgian songs. A woman acquaintance, an epileptic now working as a hotel cleaner, appeals for help in collecting $40,000 in back pay. Once her withholding boss is captured, Kakhi lets him go, claiming, “It’s under my responsibility.” This boss joins the men who captured him in singing and dancing.

So it goes, and Kakhi develops a plan to rescue his son from the debt he owes. While “Brighton 4th” may seem dark, Koguashvili enriches the lives of these Georgian men with a warmth that celebrates rather than condemns their lives.

Information and tickets for “Brighton 4th” are available at mvfilmsociety.com. Information on films playing at Edgartown Cinemas is available at entertainmentcinemas.com/locations/edgartown.