West Tisbury, Edgartown, Oak Bluffs, and Tisbury voters have all approved housing bank legislation for Martha’s Vineyard in a clean sweep for proponents of affordable and workforce housing on the Island.

While Tuesday was a huge step for the housing bank, which proposes to use a 2 percent transfer fee on the sale of property over $1 million, it still must pass at the ballot box, and ultimately be endorsed by the state legislature.

In a 324-27 vote, West Tisbury became the first town to approve the proposal as town meetings got underway in four towns Tuesday.

While the majority of West Tisbury voters were in favor of the housing bank, much of the discussion revolved around asking clarifying questions. The discussion took the better part of an hour.

Abbie Zell, a member of the M.V. housing bank steering committee, talked about the difficulties young people have getting housing. She is 31 and lives with her husband in stable housing, something she knows is rare.

West Tisbury voter Chuck Hodgkinson said the housing bank “is not a bad idea,” but there are reasons to be concerned, such as how this may act as a bank. He also spoke about the costs pertaining to the housing bank, and suggested more time is needed. Later, he congratulated proponents on the vote passing.

When the final tally was announced in West Tisbury, the room erupted in applause.

A short time later, Edgartown also approved the housing bank overwhelmingly after only a bit of discussion. Edgartown select board member Margaret Serpa was one of the few leaders on the Island to come out against the housing bank.

In Edgartown, Kate Putnam, a member of the Coalition to Create the MV Housing Bank, said this is only the first step in a process that will see the legislation reviewed by lawmakers if the ballot question regarding the housing bank is approved. Putnam cited firsthand examples of the effects of the housing crisis on-Island. She said two affordable housing cottages that were originally being rented to local workers are being sold, likely for use as a seasonal residence. “When the property sells, these workers will be displaced,” Putnam said.

According to the Dukes County Regional Housing Authority, she said, more than 1,000 households on the Vineyard are currently living in substandard housing. “Yes, I do know people who have lived in the State Forest, and you probably do, too,” she continued. “These are people who work here, and these are the people that the housing bank will support.”

Putnam said approving the housing bank legislation will give the Vineyard a seat at the table as the statewide transfer fee is being shaped and discussed. “This housing crisis threatens our community, our economy, and our way of life. We all know people who have left the Island or turned down jobs due to housing issues,” she said.

Kathleen Samways of the Dukes County Health Council spoke to the health effects she sees at the community health center due to the lack of housing. She noted that folks often don’t have money for healthy and nutritious food, and their stress levels caused by uncertainty have deleterious health effects. Additionally, the lack of housing is making it difficult for healthcare organizations to recruit staff.

A number of townspeople said they were concerned that the Island wouldn’t have adequate weight when compared with other cities and towns that will also be involved in the program.

Bruce Nevin said that in the second-to-last paragraph of the housing bank article, the language reads that individual towns and cities are authorized to issue rules, policies, and procedures that make it so that Edgartown and the rest of the Island won’t be forced to relinquish any control of their housing initiatives. “I think this is an answer to the fear and uncertainty we have been hearing,” Nevin said.

Ben Hall recalled childhood friends who were forced to leave the Island due to the lack of housing or the high cost of housing. He stressed that the heart of the community is the families that have been living on the Island for generations, adding that the proposed legislation does not involve any development, and simply serves as a collection agency. “I don’t think we should be concerned about losing control or overdeveloping,” Hall said.

C.J. Moriarty said the housing bank isn’t a panacea, but it’s a good start. While he recognized people’s philosophical objections, he said the issue is really a moral question. “What type of a community do you want to be? As any community needs, we need good teachers, a good police force, a good fire force, adequate and well-trained doctors and nurses and first responders. Through no fault of their own, these essential people are being priced out of this Island,” Moriarty said.

There were fewer than five no votes in Oak Bluffs, and the issue took less than 15 minutes, with no one speaking against the proposal.

Kyra Sullivan, member of the coalition, told voters, “I’m asking you to vote yes tonight,” and on Thursday to send the legislation to Beacon Hill. “I’m fortunate to have lived in Oak Bluffs for half my life, long enough to establish roots, start a family,” Sullivan said. “According to our regional housing authority, there are more than 1,000 households on waiting lists doing the shuffle, living in basements, living with family; we all know people who have left, we all know people who are looking, so it’s not a question that there’s a need.”

Sullivan said housing is needed for workers on the Island. “This is only a step, it’s a step forward. It’s not an adoption vote of the housing bank. A yes vote tonight and again at the ballot in two days merely sends a [signal] to legislature [for] their consideration. It gives us a seat at the table,” she said. “We’re essentially raising our hands with a collective yes vote to say we have a year-round housing problem, we need dedicated funds to address it appropriately, and please give us the right to do so.”

Once the vote was taken in Oak Bluffs, the crowd cheered the outcome.

Rachel Orr, a Vineyard attorney, attempted to amend the article, but those amendments were rejected. Orr said she fears that some of the vague language could lead to lawsuits, and she suggested that the transfer fee be split 50/50 between buyers and sellers of the property.

John Abrams, who has been a vocal supporter of the housing bank, and is part of the coalition steering committee, asked Tisbury voters to support the language as presented. “I urge you strongly not to amend this in any way,” he said.

The article had strong support, as it did in other towns. “At this point in time we need a game-changer,” voter Barbara Lamson said.

What started 18 months ago as a coalition of Island leaders blossomed into a home rule petition aimed at creating a housing bank on the Island. The steering committee of the Coalition to Create the MV Housing Bank was co-chaired by Julie Fay, former Martha’s Vineyard Community Services executive director, and Arielle Faria, current administrator of the Edgartown affordable housing committee, and resident of the new Scott’s Grove apartments in West Tisbury.

This is the third attempt at a housing bank on Martha’s Vineyard. The first in 2005 got agreement from all six Island towns and Island realtors, but was shot down by the state legislature when the Massachusetts Association of Realtors lobbied against it. A second attempt in 2019 to use 50 percent of the funds collected from the expanded rooms excise tax on rentals such as Airbnb and VRBO was shot down by town meetings, and got little to no buy-in from Island leaders.

The coalition sought to change that by bringing select board members into the process early and holding forums over the course of the past year.

During the 16 months since the housing bank coalition was announced, the Island’s housing crisis has only gotten worse — exacerbated by the proliferation of short-term rentals and a housing market that was so scorching hot it sent the median housing price from $800,000 to $1.2 million, as people sought refuge from the ongoing pandemic on the Island.

Voters in all six Island towns will be asked to consider a housing bank at town meetings and on town election ballots. A 2 percent transfer fee would be paid by the purchaser of a property on the Vineyard. The first $1 million would be exempt from the fee. So the buyer of a home for $1.2 million would pay a 2 percent fee on the $200,000.

On Thursday, Oak Bluffs, Edgartown, and West Tisbury will also consider a ballot question to support the housing bank. Tisbury’s town election was delayed, and won’t occur until next month. Chilmark’s town meeting and election are later this month, while Aquinnah voters will close out the season in May.

Four out of the six Island towns must approve the legislation for it to go forward.

For the first time in two years, voters were back in their typical venues. In Tisbury, voters were inside the Tisbury School gym for the final time, as the school is about to undergo a $55 million renovation and addition project.

Meanwhile, voters in Edgartown were at the Old Whaling Church, West Tisbury was back at the West Tisbury School, and Oak Bluffs met inside the PAC at Martha’s Vineyard Regional High School.

Although they’re no longer required indoors, masks were plentiful among the voters as a result of the ongoing COVID-19 pandemic.

Updated with a correction to Chuck Hodgkinson’s quote. 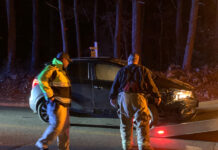