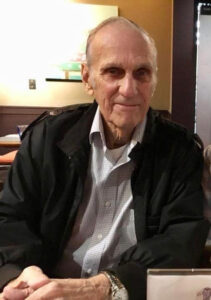 Donald volunteered for the U.S. Army with his brother Melvin. He served in North Korea from 1955 to 1957. To get there he boarded a boat with 1,800 men for 16 days. When he returned to the U.S., Donald came home to Martha’s Vineyard, where he met Judy at her high school graduation party, married her, and they raised four children together.

Donald had several jobs over the years, then started his own painting business until retirement. In his spare time, he enjoyed spending time with his family, scalloping, quahogging, fishing, and hunting with his son and nephews every fall. He would wake up every morning at 4 am, take a morning drive, and then meet with his friends for a cup of coffee. He was happiest tending to his lawn and vegetable garden, and was known for sharing his vegetables with his friends, family, and neighbors. Donald was an extraordinary man; he would lend a hand to anyone and at any time, and was known for always showing up early. In his last week of life, he told us, “If you treat people right, they will treat you right.” That is how he lived his life. He said, “I had a good life.”

He was a member of the VFW. He was also a member of the Holy Ghost Society, and enjoyed going to their annual feast, where he enjoyed their Portuguese Kale Soup while catching up with friends.

He was predeceased by his parents, his brother Frank Pachico Jr., his sisters Lillian Burovac and Susan Jackson, and his other brother Melvin Pachico, who was his best friend and he deeply missed, and also two great-grandchildren, Haydin and Haizlei Hayes.

Donald felt life should be celebrated; therefore, we will have a celebration of his life at the P.A. Club in Oak Bluffs on Saturday, Sept. 17, from 1 to 3 pm.