On Friday, June 10, 2022, Tobias Clark Myers passed away at home in West Tisbury. 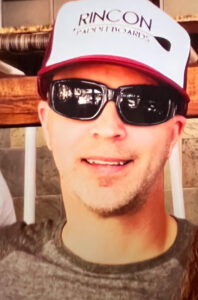 Tobias was born in Morristown, N.J., on Feb. 22, 1975. He graduated from MVRHS in 1993, where he was a multi-sport athlete (nicknamed “Batman” for his skill on the basketball court) and was also Prom King his senior year. Tobias attended St. Lawrence University, where he graduated with a bachelor’s degree in environmental psychology.

He was known for his charming smile, his physical vitality, intelligence, sharp wit, and crass sense of humor, often in evidence with his prowess as a sneak-attack mooner. He loved to make people laugh …

He enjoyed playing guitar, and appreciated a wide variety of music, but especially the type that one can pump a fist, head-bang, and mosh to. Tobias’ hobbies included getting tattooed at Art Freek tattoo shop in Providence, R.I., snowboarding, surfing, paddleboarding, and kiteboarding. He enjoyed reading historical nonfiction and fantasy, and practicing Zen meditation.

Tobias was a devoted family man to his wife Leslie and their three beloved children, Leo, Tanner, and Jesse. He was a longtime, committed member of the Island sobriety community, and had just reached his 21-year anniversary.

In the words of the actor Keanu Reeves, when asked, “What do you think happens when we die?” His answer: “I know that the ones who love us will miss us.”

Tobias will be dearly missed by all who loved him: his wife Leslie and their children Leo, Tanner, and Jesse; his mother June Miller and her partner, George Gamble; his father Clark Myers and his wife, Lyndsay; his brothers Justin and Teagan Myers; and his sister, Hadley Myers. Tobias also leaves behind many loving aunts and uncles, extended family, and friends.