Margaret DeVane Logue, just shy of 96 years old, passed away peacefully in her home in West Tisbury on Wednesday, June 22, 2022. 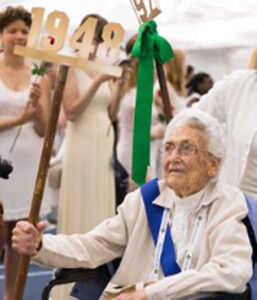 Born in New Haven, Conn., in 1926, Margaret was the eldest child of William Clyde DeVane Jr. and Mabel Phillips DeVane. She grew up in New Haven and Ithaca, and spent many summers with her maternal grandmother, Hannah Phillips, in Moriches, N.Y., and with her great-aunt, Janet Phillips (“Tante”) in Colebrook, Conn. Later in life, these childhood summers with grandparents inspired Margaret to build strong relationships with her grandchildren.

Margaret met her future husband, Edward J. Logue, at a family friend’s house. Their relationship began when Margaret turned to Ed, held up a half-finished red sweater, and asked, “If you were a man, would you wear this sweater?” They married in 1947, before her senior year of college. This began a unique and loving partnership in which Ed, an extrovert, and Margaret, an introvert, mutually supported each other and their career ambitions, something that was a rarity in many marriages of the time.

After graduating from Smith College in 1948 with a B.A. in Government, Margaret began her career as an educator. She completed graduate work in child psychology, government, and education, and later went on to earn a master’s in education with a concentration in reading and learning disabilities from NYU in 1978.

Margaret worked in a variety of roles throughout her career, including as a teacher at the Windsor School in Boston, a teacher and administrator at St. Ann’s School in Brooklyn, as head of the Carroll School in Lincoln, and later as an educational consultant and trainer. Though she’d never tout it, Margaret had a broad influence. When remembering Margaret, people regularly referred to her as “remarkable,” or “a force.” Margaret left her mark at each school where she worked, and changed the lives of many colleagues and students.

When Ed’s career took them to newly independent India in the early 1950s, Margaret worked with a group of parents to found what is now the American Embassy School for children of American diplomats in New Delhi. When the school first started, Margaret was the sole teacher of 12 students, spanning six grades, who gathered under a tree for their lessons.

When Margaret retired from the Carroll School in her early 60s, she became an educational consultant and advocate, advising schools around New England and training teachers to identify and improve teaching of students with learning disabilities. She was later drawn to train teachers through the Wilson Reading System. As a lifelong learner, she valued Wilson’s research-based methods that evolved with new findings. When travel became more difficult, she continued this work via Skype. She attended conferences, kept up with dyslexia research, and took on new students until the age of 93.

In 1962, Margaret and Ed built a summer house in Chilmark on the Island of Martha’s Vineyard with Margaret’s siblings and parents. In 1986, Margaret and Ed settled in West Tisbury in a house built by her children and extended family. Both houses became gathering places for family and friends. Everyone was always welcome in Margaret’s home.

She worked hard to actively engage in her community on the Vineyard, serving as clerk of the Chilmark Pond Association, on the Dukes County Charter Commission, the Island Parent Advisory Council, and the West Tisbury library landscaping committee. She also hosted meetings with politically active residents to foster more participation in local governance, particularly by younger voters.

While Margaret enjoyed spending time at home, her experience in India sparked a lifelong love of travel and curiosity about other cultures. Over the course of her lifetime, she traveled to over 35 states and more than 30 countries on four continents. She passed on her love of travel and learning to her grandchildren by offering each the opportunity to choose an educational Elderhostel trip, designed specifically for seniors and their grandchildren.

Later in life, Margaret enjoyed starting every day with a cup of coffee and the New York Times, followed by gardening and reading nonfiction. She wound down each day with a glass of wine and a good book of fiction (only after 5 pm). Margaret eventually “retired” at the age of 93, though she continued teaching and learning informally until her death.

In lieu of flowers, those who wish may contribute to a fund created to support her legacy in education and lifelong learning. Contributions to build the fund would be gratefully accepted, and may be sent to Martha’s Vineyard Community Foundation, P.O. Box 243, West Tisbury, MA 02575, or online at marthasvineyardcf.org/donate. Please note the Margaret DeVane Logue Memorial Fund in the memo.

A family burial took place on Saturday, June 25, at Abel’s Hill Cemetery in Chilmark. The family hopes you will join them in the fall to celebrate her life, and would appreciate pictures or stories about your favorite memories of Margaret.