Ashley Thomas DePriest died peacefully at Newton Wellesley Hospital on July 17, 2022, after a long illness. His four sons — Joe Shaun DePriest, Shaun Joe DePriest, James Reid DePriest Occouch Vanderhoop, and Luke Tyler DePriest — were all in attendance the day before his passing, and were able to say goodbye to their father. 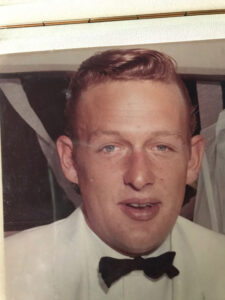 He was born on Oct. 27, 1944, in Sanford, Maine, to Avis Williston DePriest and Osby James DePriest; his father was a naval officer in the U.S. Navy stationed there at the time. He was born a fraternal twin of Osby DePriest. He was one of four boys. His three brothers predeceased him. They were, in order of birth, Robert Williston, Osby DePriest, and Don DePriest.

Ashley’s mother settled in Oak Bluffs on South Circuit Ave. when the boys were young. Ashley attended Martha’s Vineyard Regional High School, where he graduated in 1964 and was a member of the very first undefeated football team in the school’s history in 1963. He then joined the U.S. Marine Corps, where he served from 1964 to 1968; he did two tours of duty in Vietnam, where he saw and experienced many atrocities. He returned home in the summer of 1968 and married Bernadette (Crossland) Rebello on August 24, with whom he had four sons.

Ashley had many jobs, some of which were Andrews and Pierce Trucking, bouncer at the Lampost in the ’70s, doing tile work, and most notably working for the M.V. Camp Meeting Association as a groundskeeper later in life.

Ashley was a kind, quiet, private man who lived life on his own terms. He was well known in Oak Bluffs, and will be sorely missed by all.