An alarming report began to circulate in newspapers across the country during the summer of 1796. “Extraordinary Occurrence” ran the headlines. Under a New Bedford dateline, the various articles were all slight variations on a single-sentence breaking-news bulletin: “It is mentioned from Martha’s Vineyard, that a part of that island has lately been inundated and sunk.”

Fortunately, that was probably a bit of an exaggeration, although details are scarce. But it did kick off a two-decade period of curious reports about conditions on the island.

The so-called Snow Hurricane struck in early October 1804 — a fierce tropical storm that produced heavy snow over much of the state, although it probably just resulted in drenching rain on the Island. The unusual storm reportedly took down so many oak trees across the commonwealth that it crippled the shipbuilding industry for years afterward.

The years of 1805–07 were strangely deadly for Vineyarders, a period for which the Island’s mortality rate was inexplicably 50 percent higher than the average for the period. It was also a time of depopulation on the Island, as native islanders continued to migrate to New Vineyard, Maine; Ohio; and points west.

On June 16, 1806, a total solar eclipse brought the stars out just after noon for about a minute. Mathematician Nathaniel Bowditch, who counted the stars in the noontime sky from his home in Salem, reported afterward, “The eclipse was observed at Martha’s Vineyard by several persons on the point called West-Chop, about half a mile from the extremity of the point, at which place the total darkness continued about a minute; and at the distance of a mile and a quarter south of this place, the eclipse was not total.” It was the last total eclipse to cross the Island until 1925. (We haven’t had one since, and we won’t again until May 1, 2079. Mark your calendar!)

Two months later came the tropical storm sometimes called the Great Coastal Hurricane of 1806, a Category 2 storm that struck Cape Fear, N.C., before pausing off our coast, dumping recordbreaking quantities of rain upon the Island. Shortly afterward, this remarkable report began to circulate:

“Edgartown (Martha’s Vineyard) August 28, 1806. We have had a very severe storm here. On the morning of the twenty-third, the heavens appeared to be covered thick with darkness; the wind south-west. It soon began to rain attended with flashes of lightning, not sharp, and but little thunder. The rain continued all day, and at times seemed to pour down in torrents; towards night it abated. In the night the wind shifted, and in the morning was at east; it soon began to rain, the wind veered to north-east, and increased to one of the severest gales I have ever experienced. The rain increased with the wind, and the face of the ground appeared a flood of water. The quantity that fell is almost inconceivable. A barrel that stood in the open field was filled. At the most moderate computation, it fell thirty inches deep upon a level. Some among us estimate it at three feet. It is impossible to estimate the damage it has done. The corn is all beat flat to the ground, and the stalks stripped of their leaves. It has risen since, but will never recover. The labor of the husbandman, I presume, is cut short more than one half. The prospect of fruit was promising; the apples are almost all blown down. I believe not one in twenty is left on the trees. We have experienced this summer the extremes of drought and of flood. From the twentieth of April to the twentieth of July, but very little rain; and now a rain in judgment.”

Curiously, this era coincided with the nation’s first telegraph system, an experimental network built between West Chop and Boston, and in operation from 1801 until 1807. We can only imagine how these local news events might have been abbreviated into early mechanical semaphore.

But the flood of 1806 was certainly not the only rain disaster to befall the Vineyard. In July 1737, the Rev. William Homes of Chilmark wrote of the “excessive rains which raised the rivers upon this Island to such a degree that the dams of the water mills were carryed away by them, and the mowing ground near the rivers was very much damnified.” In March 1836, a Tisbury correspondent reported, “We have had such a freshet as was never before known by the oldest inhabitants. The little brooks on the Vineyard were deep enough for large ships to float in, and wide in proportion. Seven mill dams were carried away.” And Mary Beetle Athearn similarly recalled the rainstorm of September 1888, which flooded the center of West Tisbury and burst every dam from North Tisbury to the Mill Pond, nearly taking the satinet factory (the Old Mill) with it.

September 1815 brought one of the most powerful hurricanes to strike the Vineyard in recorded history, a Category 4 monster that blasted the opening into the Lagoon now spanned by our drawbridge, and which doomed old Bass Creek to be a non-navigable body in Vineyard Haven.
Unbeknownst to most Islanders until much later, 1815 was also the year Mount Tambora erupted in Indonesia. It was the most powerful volcanic eruption in recorded human history. The resulting plume of ash circumnavigated the world, lowering global temperatures to produce what would be known as “the Year Without a Summer” in 1816. Three inches of snow fell in Massachusetts that June, and frosts occurred throughout each of the summer months.

Although local records of the 1816 hardship have not yet come to light, similar difficulties were documented resulting from the catastrophic eruption of Laki, an Icelandic volcano, in 1783. The sulfur dioxide haze from that eruption produced New England’s longest and coldest winter on record. In March 1784, newspapers reported that a large number of vessels were “detained at the Vineyard, by the late severe frost, for upwards of two months.” Trapped in the ice among them was the 300-ton, 28-gun, copper-bottomed naval warship Grand Turk, a storied Revolutionary privateer. On board was the corpse of Capt. Thomas Simpson of the Continental Navy, waiting to be returned to his native Portsmouth, N.H., for burial. 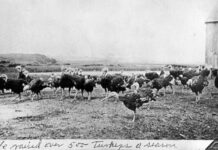 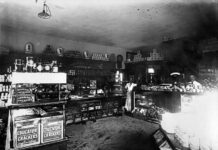 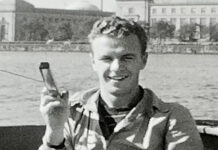