Jacque Cage, 75, passed away on July 20, 2022, at Martha’s Vineyard Hospital, due to complications from lung cancer. 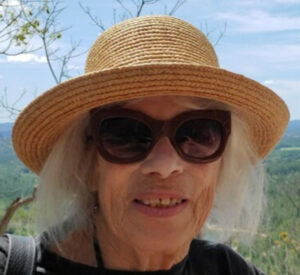 Jacque was born in Queens, N.Y., living near a large extended family of grandparents, aunts, uncles, and cousins. Her family then moved to Long Island and, after a short stint in Georgia, settled in Massachusetts. Jacque attended college prep in West Virginia and, shortly after giving birth to her first son, R.J., received a degree in social work from Arizona State College. After getting her degree, R.J. and Jacque lived in a variety of states before visiting and falling in love with Martha’s Vineyard in 1974, and staying for good. While living on the Vineyard Jacque gave birth to her second son, J.D., and became deeply involved in Island life and the community.

While living on the Vineyard, Jacque worked for the Tisbury Town Hall, the Annex, and Elderly Services before retiring as the director of Elder Services for the Vineyard several years ago. She was also involved with many groups and organizations to help improve the Island community, from teaching ESL classes at the high school to serving with the Martha’s Vineyard Center for Living. She will also be remembered for selling strawberry shortcakes during the Tisbury street fair, rowing with friends on Sunday mornings, volunteering at Polly Hill Arboretum, and ringing the bell for the Salvation Army.

Jacque is survived by her mother Frances; her brother Richard; her sister Shari and husband John; her brother Lance and wife Kristina; her children Richard James (R.J.), John David (J.D.) and wife Johanna; her niece Caitlin and husband Dan, her nephew Andrew and fiancée Kaitlin; her grandchildren Jeremy, Erin, Alex, Ian, and Evie; her great-grandchildren Alestair, Milo, and Theodore; and many friends and acquaintances, all over the Island.

A service to celebrate Jacque’s life will be scheduled in the near future.