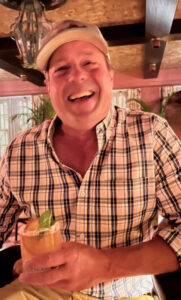 Born in New York City, Edward graduated from Ridgewood High School in Ridgewood, N.J., in 1991. Edward received a B.A. in music from Wagner College in 1995 (while working nights as the sound engineer at the Bitter End in NYC), and postgraduate degrees in audio postproduction, advanced mixing techniques, and advanced audio editing from Full Sail University in Winter Park, Fla. Edward also enjoyed construction and fine carpentry, and was a licensed Florida contractor.

Upon completing his postgraduate education at Full Sail University, Ed continued pursuing his love of music by teaching at both George’s Music and Full Sail. Teaching guitar and trumpet to students both young and old filled him with pure joy. Ed also loved performing live at various venues around New York City and Orlando with his bands Wood Dog, Stone Ryder, Lounge Orchid, Triebe, and the Ed Self Band. Ed was also a master sound engineer who custom-built recording studios that championed his belief in the accuracy of using analog recording instruments to achieve the best sound quality.

Ed was a truly gifted and brilliant musician, singer, and songwriter. The lyrics of his songs never fail to touch the heart of the listener, and his musical composition was unmatched. Ed could play any instrument he touched within moments of picking it up. Guitar, trumpet, violin, piano, viola, bass, cello, harp, bandurria, ukulele, kazoo, banjo, and harmonica were just some of the many instruments he had mastered. Ed was also a brilliant improviser. There was no better time than a night after a big family dinner where Ed would spontaneously announce he was going to do a “napkin song.” Ed would pass a napkin around, and everyone at the table got to write a sentence for him. He would then take the napkin, pick up his guitar and improv a song that would not only bust guts with laughter but also touch the hearts of everyone gathered there.

Ed was also an extreme sports enthusiast and athlete who loved heli-skiing, windsurfing, waterskiing, kneeboarding, and kiteboarding. He loved to fish, and was a master fly fisherman and surfcaster. All of his summers were spent on Martha’s Vineyard at his beloved family home on Cape Poge. Days were spent fishing, exploring the island’s many wonders, and in quality time adventuring with his parents, siblings, and cousins. Once he had children of his own, Ed delighted in sharing the Island’s magic with the next generation. He taught his children how to surfcast, and where the fiddler crabs live. He taught them how to make the ocean glow at night by gently swirling the magic phosphorescence, how to negotiate a good deal with the local Cape Poge jingle shell currency, and how to find the dock from the boat on a pea soup fog day. Throughout his entire life, Edward lived every moment to the fullest. A laugh from Ed would light up any room, because Edward laughed with his whole heart. Ed always filled up every room he walked into, and the world is a dimmer place without his sparkle.

Edward is survived by his children, Edward B. Self IV and Caeli C. Armstrong; his parents, Judi Rolin Myers and Mel Myers of Blufton, S.C., and Dr. Edward B. Self Jr. and Leslie S. Self of Charleston, S.C. and Edgartown; his sisters, Rachel M. Self of Edgartown, and Mrs. Meredith Antonelli of Bradenton, Fla.; his brothers, Anton E. Self of Sao Miguel, Portugal, Rob Antonelli of Bradenton, Brooks W. Mitchell of Bedford, N.Y., Douglas Kennedy of Naples, Fla.; and his many cherished aunts, uncles, cousins, nieces, and nephews. Edward is also survived by his beloved brothers in music, David Morrissette and Jason Schmidt; his dearest friends and confidants, Jim Atwell and Amanda Mitchell Self; and his treasured pets, Mallie the Labradoodle and Congo the African gray parrot.

Funeral services will be private. The family asks that in lieu of flowers, donations be sent in memory of Edward B. Self III to the Martha’s Vineyard Derby, c/o Chris Scott, Derby Treasurer, P.O. Box 2101, Edgartown, MA 02539.