There has been some confusion about where the two flights came from that landed at Martha’s Vineyard Airport on Wednesday afternoon — mostly because Florida Gov. Ron DeSantis has taken credit for the flights even though they originated in Texas.

Both planes originated at Kelly Field in San Antonio, Texas, then went to Crestview, Florida, Martha’s Vineyard Airport director Geoff Freeman told The Times. From there one plane went to Spartanburg, South Carolina and then traveled to the Vineyard and the other went to Charlotte, North Carolina before coming to the Vineyard.

The planes didn’t need permission from airport management to land, according to Freeman, as the FAA controls flights and Martha’s Vineyard Airport is a public service airport. When asked, should additional planes come with migrants if they can be redirected, Freeman said not by airport management. Generally speaking, he said, “we cannot deny flights.”

An earlier version of this story had the wrong name of the charter company. 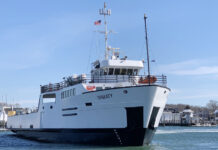