Migrants who were transported unwittingly to Martha’s Vineyard and then relocated to Joint Base Cape Cod have been free to come and go from the military base. Edgartown attorney Rachel Self, who has worked on behalf of the migrants, said some have taken trips to places like the Cape Cod Mall and two of them left on Sunday for New York City where they hope to establish their new lives. One migrant appears to have departed prior to the bus trip off-Island, according to state Rep. Dylan Fernandes, D-Falmouth

“It’s been made very clear to them that they can leave and go anywhere they want at any time,” Fernandes said.

As far as what’s next for the majority still at the base, Fernandes said that depends.

“It’s up to everyone’s individual immigrant status and they’re working through that with their attorneys,” he said. He added what caseworkers are able to assist regarding housing and school also factors in.

“And then it’s also up to what they want to do,” Fernandes said.

“I expect you’re going to see a number of these individuals and families try to figure out the next steps of their lives,” state Sen. Julian Cyr, D-Truro, said. “Many of them actually had plans to travel from San Antonio to locations all across the county.”

“Very importantly, all of these people are known to federal immigration authorities,” Cyr said. “They had reported to border authorities in claiming asylum. These are largely Venuzualans who are fleeing a brutal communist dictatorship. So they are not in violation of federal law.”

Self said housing at the base is available for up to three months but none of the migrants, that she’s aware of, are entertaining staying there.

“Everybody just wants to get started with their life,” she said.

Fernandes said the state’s federal delegation was helpful in supplying status extensions and flexibility to the group. In particular, Fernandes said Sen. Elizabeth Warren, D-Mass, spoke with the director of Homeland Security to assist in the matter.

Self said a few of the folks from the group “really bonded” with some Islanders and have expressed interest in returning to the Vineyard. Self said they also have formed a community among themselves.

“You know when you’re victimized and you’re around people who you were victimized with, it does form a sense of community and they really have bonded with each other. And so a lot of them want to stay in contact with each other and they also want to be a part of the Venuzualian community here in Massachusetts.”

The plight of the migrants has whipped up hateful rhetoric and a number of Vineyard businesses have been the recipients of crank callers.

Cyr said his office has received some “pretty nasty correspondence” and one in particular that was threatening and subsequently relayed to law enforcement.

Cyr saw it as a reflection of “the nastiness we see in national politics” and those politics, for the time being “have come to Martha’s Vineyard.”

Cyr went on to say “most decent Americans” are unswayed by bullies like DeSantis or “trolls” at home on their computer or phone.

“I don’t know when helping human beings became a controversial thing in this country,” Fernades said. He added, trolls are “not something that’s occupying my time or my mind.”

Fernandes said there’s clear right and wrong in the situation and he’s sided with the right side and the Cape and Islands community “overwhelming” support that position — ”treating human beings with basic humanity.”

“I think the best response we can give to that kind of hate,” Cyr said, “is first and foremost to keep our eye focused on helping these vulnerable families and other new arrivals in Massachusetts…and for Islanders to keep doing exactly what we’re doing — to celebrate and honor the extraordinary and passionate response where Islanders welcomed these new arrivals [and] treated them with dignity and respect.”

“I just couldn’t be prouder to represent Martha’s Vineyard,” Fernandes said. “So many people from across the Island pitched in to help out and it was just really moving to see.”

Fernandes added, “I think the Vineyard showed the country what treating people with dignity and compassion looks like and sadly I think this country, or at least part of it, definitely needs a reminder of what that looks like.”

Updated to correct an attribution. 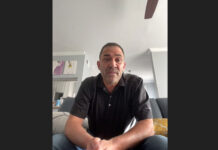 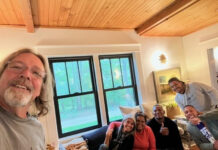 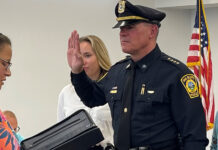