Gardens are at their end-of-season best, the Farmers Market full of beautiful produce and CSAs delivering an abundance of summer goodness. What to do with this excess bounty? Stick it in the veggie bin at the bottom of the fridge and hope you’ll get to it in a timely way? Maybe you will. Maybe not, instead opening that fridge drawer to a wilted mess, fit only for the compost pile or the chickens.

Try instead to stretch this seasonal glory by refrigerator pickling this last summer bounty to enjoy well into the future. Weeks after the chickens have devoured the last of the slimy stuff, you’ll be dining on crunchy summer vegetables.

Not only delicious, pickled veggies are gut friendly. Eating fermented foods is said to boost the number of beneficial bacteria, or probiotics, in your gut. Probiotics are associated with a variety of health benefits, including improved digestion, better immunity, and increased weight loss.

Inspired by a bumper crop of cucumbers from my tiny garden, I decided to give quick pickling a try. I’ve eaten refrigerator pickled veggies — the best at JB Blau’s now defunct Sea Smoke BBQ restaurant. But I’ve never attempted to make them. How hard can it be? Unlike canning, no special equipment, hot water bath, or concerns about properly sealed jars is involved. The basic brine can be made easily with ingredients you likely have on hand. And there are dozens of recipes on the internet to guide the beginner — most of them basic and pretty similar.

I decided to start small with a 2-quart recipe and pickle what I had in the house.

About containers. Internet recipe illustrations displayed Mason canning jars. I went instead with three, 21-ounce lidded working glasses, those wonderful vessels from Crate and Barrel that serve as either drinking glasses or storage jars.

The vegetables. On hand I had: cucumbers, red onions, scallions, red peppers, baby carrots and garlic — plus a couple of tiny hot peppers and some raw ginger. I wish I’d had a head of cauliflower, a vegetable heavily featured in most recipes. Green beans and radishes also appeared in many online recipes. For aromatics, I put in peppercorns and dill. Other fresh herbs recommended are thyme, oregano, and rosemary, as they hold up well. Dried herbs thyme, dill, rosemary, oregano, or marjoram are also recommended.

For the brine I followed this basic recipe:

In a medium saucepan, bring 4 cups of water to a boil, reduce the heat so the water simmers and add at least 6 cloves of garlic. Cook for 5 minutes. Add 2 cups of vinegar and 2 tablespoons of salt, raise the heat and bring to a boil, stirring until the salt dissolves. Remove from the heat, fish out the garlic and distribute among jars. Pour the hot liquid over the jarred vegetables. Let cool, cap and refrigerate.

The results? Yummy! Refrigerator pickles are said to last many weeks, even months, if you can keep your hands off them that long. I could not, so I’m contemplating a second batch — once I lay my hands on a head of cauliflower.

For the more ambitious who want to go big, Jeisook Thayer has been kind enough to share her recipe “from the 70s for quick pickles that has not failed me.” Jei is the maker of M.V. Kimchee sold at the Net Result, Vineyard Grocer, and Ghost Island Farm. She has been pickling for decades here and in her native Korea. The following recipe “produces a lot of pickled veggies and lasts for six month plus,” she told The Times. “I love making it because your veggies stay crispy crunchy … real fresh crunch.” This recipe is a little different in that it blanches the vegetables before putting in jars.

Wash the vegetables and cut into bite sized pieces. Cauliflower should be broken into florets, discard the stems.

Bring 3 quarts of water to boil. Add all the cut veggies to the boiling water and turn off heat at once. Let veggies stay in the water for two minutes. Drain off water and spread out to dry on a clean tea towel. When veggies are cooled, pack the pieces tightly into glass jars.

For the brine, mix sugar, vinegar, salt, and water and bring to a boil. Let it cool, pour this liquid over the veggies until they are completely covered.

Cap the jars and store in the refrigerator. Let it stand for at least one week before using.

You can also use this marinade for peaches and serve cold as a dessert!

Something old, something new 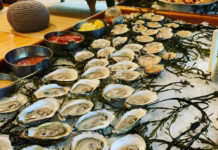