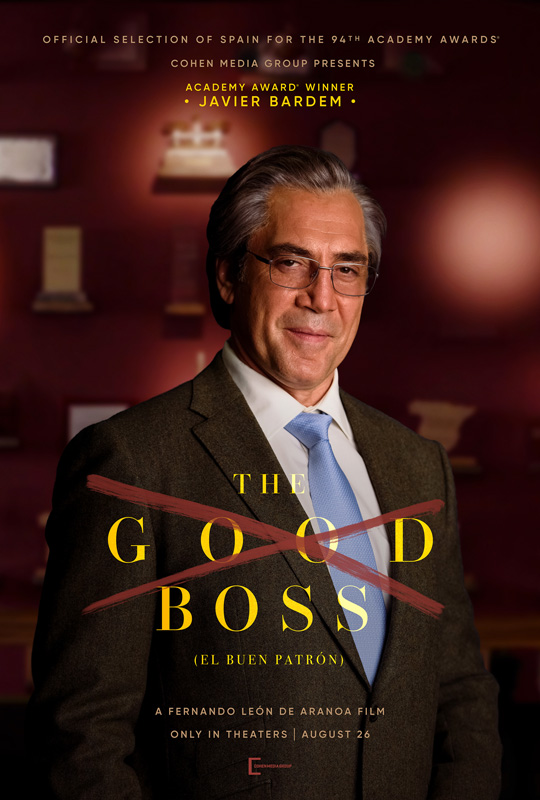 “The Good Boss” is playing at the M.V. Film Center on Thursday, Sept. 29, and Friday, Sept. 30, with Léon de Aranoa directing and Javier Bardem starring. There isn’t much that’s good about Bardem’s Julio Blanco, the boss in this film that’s a satire on the corporate world. Bardem does a terrific job as the head of an industrial-scale factory called Básculas Blanco, which he’s inherited from his father.

The viewer meets the ironically named Blanco giving his workers a so-called pep talk, in which he claims, questionably, that because he and his wife have no children, the workers are his family. Then he fires one of his interns, whose parting words, “I love you,” raise questions about what he’s been up to with his interns.

It turns out that a committee will come and decide if the factory is to earn an award for excellence, and a worried Blanco starts doing everything possible, ethically or not, to ensure a win. This apparently “good” boss intervenes for the ruffian son of Blanco’s gardener Fortuna (Celso Bugallo), who’s gotten into a fight and been jailed, by giving him a job at his wife’s dress store.

The viewer sees Blanco living in a fancy house, belying his so-called generous support for his workers. Then Jose (Óscar de la Fuente), a Blanco employee whom he has fired, sets up a protest on a hill opposite the factory’s entrance. He shouts that his children will be hurt, uses signs, then a bullhorn, to attack Blanco, who enlists the clueless guard at the factory gate for help. Eventually Liliana (Almudena Amor) is the next intern who is on to his lascivious intentions, and proceeds accordingly.

The viewer sees Miralles (Manolo Solo) as Blanco’s favored employee, an example of his favoritism. Blanco repeatedly puts his arm around Miralles and chats erroneously about the childhood they had together. It turns out that Miralles has been neglecting his job because he’s suffering from his wife’s affair. Blanco intervenes with Miralles’ wife, who says it’s actually Miralles who’s having the affair, and eventually tells him to mind his own business. An Arab employee, Khalid (Tarik Rmili), who is involved in various sexual liaisons with workers, ignores Blanco’s bossy notions and instead claims, “Don’t give me any of that family crap. Look at my skin. I’m not your son.”

In fact, Blanco is incompetent and corrupt, which becomes more and more obvious as the movie progresses, in large part due to Bardem’s accomplished acting. Blanco’s wife arranges a dinner party with Liliana’s parents as guests, along with Liliana and her boyfriend, and Blanco is, of course, appalled, especially once his wife invites Liliana to live with the two of them.

Bardem, as Blanco, acts more and more bungling, enlisting Fortuna’s roughneck son to beat up Jose and set fire to his car, eventually killing him. Bardem plays Blanco with increasing idiocy. And this is an example of how the corporate world behaves: imperious, controlling, and corrupt, all appropriate enough.

Information and tickets for “The Good Boss” are available at mvfilmsociety.com.