“This is an account of one citizen’s attempt to engage his government during a particularly troubled time of our national life …1965 to 1974.” So begins a remarkable, community-built book that’s part memoir, part history, part tribute to that “one citizen,” Milton Mazer, who moved from New York to West Tisbury in 1961 with his wife, Virginia, and their two young children, Ruth and Mark. Milton, as he was known around West Tisbury, was 50. The first psychiatrist to practice on the Island, he set up shop in Edgartown, where he opened the Mental Health Clinic, the precursor to what we now know as M.V. Community Services. The book is called “David’s Slingshot — Antiwar Letters from an Island Doctor.”

From 1964 to 1973, every young man in America was fundamentally affected by the Vietnam War, whether we enlisted, were drafted, dodged the draft, or just lucked out. While far, far too many of us, some 58,000, were killed there, the rest of us were left to live with the historical reality of a mistake, a gross error. Some of us never recovered from the war’s trauma, others were left wondering at their good fortune. What at first had seemed a remote, inconsequential military entanglement became a national nightmare that divided the country to a degree unmatched until Donald Trump came along.

Few stayed silent. One Vineyard resident, Milton Mazer, voiced his displeasure by contacting the elected officials who represented him. He kept copies of the letters he wrote, along with the many responses to them.

Born in New York in 1911, Milton grew up in Philadelphia, eventually earning both a bachelor’s and a medical degree (1933) from the University of Pennsylvania. He enlisted in the Army Air Corps in 1943, serving in England. He switched from medicine to writing after the war, publishing short stories in the New Yorker and Esquire. Pivoting once again, he graduated from the Academy of Psychoanalysis in 1950, practicing in New York until moving to the Vineyard.

While the contrast between Manhattan and West Tisbury was even more dramatic 60 years ago than it is today, Milton dove right in here. His patients became his friends, he took up sailing, and helped establish the first Democratic Town Committee in West Tisbury. In 1967 he was elected town moderator.

Meantime he kept a sharp eye on events in the wider world. From his socialist parents he had learned “the belief that the gift of democratic government does not come without cost; it requires constant nourishment by its citizens.” To Milton, one form of nourishment was dialogue, and to this end he began to write those who represented him, including three sitting U.S. presidents, three vice presidents, assorted Cabinet members, and senators and representatives in Congress. Between 1965 and 1974 he wrote more than 100 letters, all in opposition to the Vietnam War. More than 50 triggered a response.

In some letters he argued against the war by citing historical precedent. In others he appealed to the recipient’s moral values. Some came from a global perspective, sounding a bit grandiose: “Neither our own self-interest, nor the interests of mankind points to the need for such a struggle.” (To Lyndon B. Johnson, president, Feb. 14, 1966.) When his attempts at reason fail, he brings it close to home. After learning that a Vineyard boy had been killed, Milton wrote to Vice President Humphrey, “I ask myself and I ask you, what goal do we have in Vietnam which makes this boy’s death worthwhile?”

As compelling as the individual letters are, Milton’s project reminds us of the importance of civil discourse, in short supply currently. That his correspondence has been preserved and presented to us in this striking volume is still more remarkable. And it almost didn’t happen.

For several years after his father’s death in 2007, Mark held onto the manila envelope chock-full of letters. When he realized he didn’t have time to take on the project, he passed the trove on to fellow West Tisbury resident Michael Colaneri, a retired physician’s assistant who had grown up in Vineyard Haven and served in Vietnam.

“Everyone needs a project when they retire,” Colaneri said last week. “I had just helped Doug Vanderhoop, a John Prine fanatic I went to MVRHS with, produce a CD of his own, so when Mark asked, I thought, Why not produce a book?”

First step, check in with Tisbury Printers, where Chris Decker had the letters digitized. Janet Holladay, who stepped in to help lay out the book, felt that photos were needed. No problem: An amateur photographer since high school, Mike produced photos he’d taken in Vietnam — demanding, powerful images that far exceed mere illustration of the book. The next local talent to pitch in was Beth Kramer, the now retired director of the West Tisbury library, who with her successor, Alexandra Pratt, secured a grant to pay for printing costs.

In addition to Milton’s letters and second thoughts, the book includes an insightful foreword by Dr. Felton Earls, as well as tributes at the end from Dr. Peter D. Kramer, Tom Bennett (a colleague of Milton’s at Community Services who has provided invaluable support to Island veterans for half a century), and Mike Colaneri himself. Kramer captured Milton’s essence perfectly, noting “his moral sensibility and his practicality and kindness.” Also included is Julia Wells’ thorough, thoughtful obituary from the Jan. 12, 2007, Vineyard Gazette.

In the end, though, we’d be the poorer if Mike Colaneri hadn’t taken on this labor of love. More interested in history now that he’s retired, he calls the book “a little piece of history for the town, for Mark, for veterans.”

To Mike goes the last word: “Many of my friends didn’t make it back home. That’s why I believe we should all do what we can to make our efforts and contributions to our community as positive as we can. Like Milton did.” To that end, the book is available at the West Tisbury library, for free; a donation to the West Tisbury Library Foundation is suggested.

This Saturday, Oct. 8, at 3 pm, the West Tisbury library will present “A Man Who Changed the Vineyard: A Conversation on the Life and Legacy of Dr. Milton Mazer.” Attendees will receive a copy of “David’s Slingshot,” thanks to a Cultural Council grant. 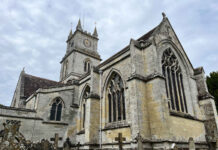 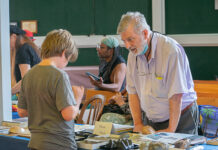 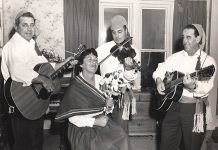