In the mid-1980s, Whitney Hanschka graduated from Stanford University in mechanical engineering — the stuff of aerospace, biotech, and robotics — no doubt on a path to change the future. Today, Whit Hanschka is a blacksmith, a craft dating back before medieval times.

Unlike others featured in this series, Hanschka didn’t have a classic “second act,” belatedly heeding a stifled passion and finding his other self. What he did have was a journey, from the day he settled on Martha’s Vineyard, to discover his true self … here. And “here” seems to have been the recurring theme.

“After college, I didn’t have a concrete plan as some people do,” Hanschka says. So, as he had done for summers as long as he could remember, he came back to Martha’s Vineyard. “It felt like home … I had no real sense of what I wanted to do, had not yet found ‘the answer.’ Aren’t we all looking for the answer?” He says there was “a comfort level here,” with kindred spirits who were perhaps also looking for the answer.

As a kid on the Vineyard, Hanschka had learned to sail, and loved it. Why not look for work making sails or building boats? He was hired at the sail loft above Gannon & Benjamin boatyard, and later at the boatyard itself. There, in many ways he put his mechanical engineering education to work, and perhaps got an unofficial degree in understanding “how things go together.”

A few years later, Hanschka was recruited to work at Penikese Island School in Buzzards Bay, teaching kids with troubled pasts how to do “concrete things as a metaphor for how to live a productive life.” It was hard work, physically and emotionally, with only “cold running water, no electricity, an hour-and-a-half boat ride to get there.” Hanschka worked a week on and a week off, returning to the Vineyard between stints, picking up intermittent work at the boatyard. At Penikese he got the idea of building a forge and teaching blacksmithing to the kids. The kids loved it. And so did Hanschka: “Heating up metal, hammering it into shapes and everything. I think we all have a little pyromania in us.”

Meanwhile, Hanschka attended some New England Blacksmiths meets, and began to get a real education in the craft. He says he had “an epiphany … I kind of realized that, Geez, there are people doing this full-time, making a living.” And they’re “doing cool stuff.”

Around that time, he and his wife bought a house on the Vineyard. He recalls, “It’s kind of comical, because you sign the papers for the mortgage … and it’s all contingent on you having a job. We signed, and the next day, I gave my two weeks’ notice at Penikese.” New house, mortgage payments, no job, no paycheck, a new career in something he’d never done before.

Would he have done that anywhere else? “I felt comfortable enough kind of jumping off the deep end buying a house … and then quitting because the Vineyard felt like a safe place to do that. It started with a love from childhood of the Vineyard.”

He set up shop across from the down-Island Cronig’s in a little shack. From then on, life depended on whether he really could live and pay his bills with a centuries-old trade now brought up to date.

Was there a special sense of supportiveness from other Vineyarders, those kindred spirits? “I’d say that probably more important than that was they hired me. People offered me money to do the work.” Contractors, architects, builders, homeowners, and business owners all took a chance and spread the word, and Hanschka Fine Metalwork was born. Pyromania with pay.

Today his work is a combination of blacksmithing and metal fabrication. For the layperson, here’s the difference: “Blacksmithing is essentially heating the metal up in a coal or gas forge and treating it like clay — except it’s so hot you can’t touch it — and you use hammers and tools and you form it into shapes, like dragonhead railing handles or spiraled fireplace tools, or scrolled post heads. Metal fabrication is more practical items — long guardrails of stainless steel posts around a swimming pool, or simple stair rails for safety on a front porch.” One can be artistic, and the other tends to be more functional. But as Hanschka is quick to say, “There’s a blurry line between craft and art,” centuries-old in either case.

A lot of people refer to what Hanschka has done and does as “romantic.” Making sails or building boats, or mentoring troubled kids, or creating a forge, bending red-hot metal into pragmatic or aesthetic shapes. He says, “Yes, it can be romantic. And rewarding. But sometimes, often, it’s also just hard and sweaty and tedious.” Like life here on Martha’s Vineyard. Romantic but real.

Is there something magic about here? You never know, because you don’t get to live your life twice, in two different places. But it did happen on Martha’s Vineyard. Here.

Jim Dale is a nonfiction writer who has co-authored books on topics ranging from sports to business, to medicine, to politics, most recently the memoir “We’re Better than This,” with Congressman Elijah Cummings. 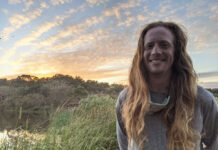 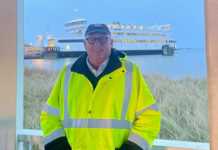 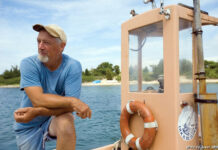